Carlos Tevez is a player whose mood and loyalty seems to change like the wind, but his choice in football boots has always been consistent. Until this weekend, when the Argentine Ace was spotted in a pair of blacked-out Puma v1.11‘s! 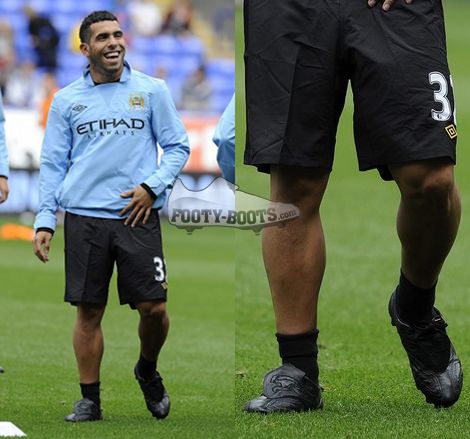 The former Manchester United and West Ham forward turned out for the warm-up in Manchester City’s enthralling encounter with Bolton Wanderers in a pair of Blacked-out Puma v1.11‘s, despite having consistently worn Nike football boots since his move to the Premier League.

Tevez started out life with West Ham in the classic Nike Tiempo Legend II, and remained faithful to Nike’s modern-classic football boots until the World Cup last year – when he switched to the CTR360.

Since then, Teves has (mostly) stuck to the original CTR360 over the CTR360 II, often spotted in the classic Sapphire Blue colourway (even eschewing a custom pair of White/Tour Yellow football boots Nike made for the FA Cup Final back in May).

Now, it seems that Tevez is looking to broaden his football boots-horizons in a pair of Puma v1.11.

Manchester City’s top-scorer last season didn’t actually rack up any game time in the Puma v1.11, instead coming off the bench wearing his beloved Sapphire CTR360’s – but this appearance in a rival brand’s football boots is sure to set the rumour mill in motion.

Argentine comrade Sergio Aguero has kept boot-spotters entertained over the summer, cycling unpredictably between Nike, adidas and Puma, before seeing out his first competitive games in Manchester City shirt in a pair of blacked-out leather Puma v1.11‘s – so perhaps Tevez has borrowed his team-mates boots to warm up in?

There has been speculation in the industry that Puma are looking to add a couple more faces to their stable before the season kicks into high-gear, having already tempted the likes of Steven Pienaar, Matthew Etherington and even Thierry Henry to join them over this summer – it seems Tevez might be an athlete who is in their sights!

Whether it’s a serious coup for Puma, or just a case of Tevez borrowing his countryman’s football boots for a session, you can’t deny the sheer co-incidence of both Manchester City’s Argentine forwards wearing the same blacked-out cleats at the same game!

We’ll keep you posted on any developments with this story as they happen!

Written By
Ramsay
More from Ramsay
Puma select Aguero and Reus to face off in this head to...
Read More