Winning the Carling Cup would be the springboard to a minimum top two Premier League finish for Arsenal, according to new Opta statistics. 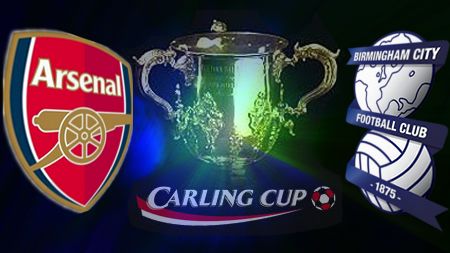 Statistically, over the past ten years the winner of the competition has achieved a 10% increase in points gathered for the remainder of the season, enough to guarantee a runners-up position at least.

Opta data compiled for this weekend˘ Carling Cup Final reveals that for the successful team the average points haul per league game rises from 1.81 to 1.99 after the final.

However, a defeat could spell another barren season for Arsene Wenger Ĺ› over the past decade losing finalists who were still involved in all four major competitions ended up with nothing at the end of the season.

This has already happened to Arsenal following their 2007 defeat to Chelsea before the Stamford Bridge outfit suffered the same fate a year later, ending the season empty-handed.

Of the 20 competition finalists in the last decade, only three have dropped in the table after playing in the final Ĺ› eight teams have improved their position whilst the other nine stayed put.

This spells good news for Birmingham City who will also be cheered by the fact that in the past decade the only team to be in a relegation place when they played the final was Blackburn Rovers in 2002 who roared up the tabled to finish 10th that season.

WINNING THE LEAGUE CUP IS PERFECT REMEDY FOR CONTINUED SUCCESS

Opta data shows that in the last 10 seasons, the League Cup winner has never ended the season in a worse position compared to when they played the final, suggesting that lifting the trophy gives an extra incentive to finish the season in a bright manner and putting paid to the myth that teams rest on their laurels after League Cup success.

It also means that winning the League Cup would see Arsenal finish no worse than second in the Premier League next May. In fact, of the 20 finalists over the last 10 League Cup campaigns, only three have dropped in the table after playing the League Cup final. In contrast, eight teams have improved their position whilst the other nine stayed put.

On six of the seven times when winners kept the same position throughout, they were already occupying one of the top three spots in the Premier League at the time of the League Cup final.

If Birmingham City can upset the odds at Wembley, they can take heart from the fact that the only team to be in a relegation place when they played the League Cup final over the last 10 seasons was Blackburn Rovers in 2002: Graeme Souness˘€žË side beat Spurs 2-1 and from 18th at the time of the League Cup final, roared up the table to end the season in 10th spot.

Written By
Kyle Elliot
More from Kyle Elliot
It's Transfer Market Madness as the Weekend Review does it's level best...
Read More