All eyes will be on Wembley this Sunday as Liverpool take on Cardiff City in the 2012 Carling Cup Final!

Both teams will have reason to celebrate should they lift the year’s first piece of silverware, but Carling are putting the party in fan’s hands for the first time ever, as they give fans total control of Wembley Stadium during the first ever Customised Cup Final! 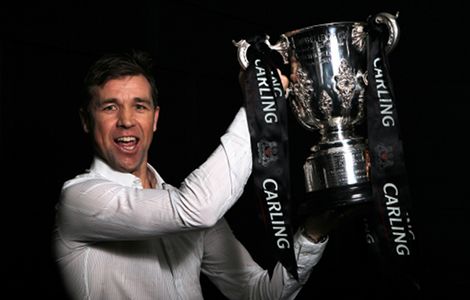 Carling will be giving fans the chance to influence nearly all the off pitch aspects of the final;

Pre-game, supporters will be asked to choose the song they would like to hear when their team lift the trophy and even put questions to club legends, in real time via Facebook.

During the game, control over how Wembley looks will be handed over, with fans choosing which information and messages of support should be displayed on the pitch-side boards, and show on the big screens the player they think is having the best game.

We grabbed a few words with Cardiff City promotion hero, former Welsh International and all-around top guy Andy Legg to see how he rated his team’s chances at Wembley this Sunday!

What’s your take on the ‘Customised’ Cup Final that Carling are planning for Liverpool and Cardiff this Year?

I think it’s great – getting the fans involved, sending in messages on the boards and even what music they want played when their team wins the Cup.

It’s definitely something that I’ve never heard of before – and I’m really looking forward to seeing how it works!

You’ll obviously be backing Cardiff – what song would you pick for the Bluebirds to lift the cup to?

I think I’d best leave that one for the fans – I’d probably end up picking the wrong one!

Do you think Cardiff will favour being underdogs going into the final on Sunday?

I think they’ll know they’re not the favourites, but I don’t think it will effect how they approach the game.

They’ll be going in with the attitude that they’ve got nothing to lose – it’s different to the past few visits to Wembley over the years. 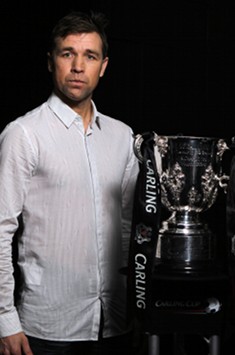 Looking at the FA Cup with Portsmouth a few years ago – maybe the hardcore fans expected them to win that game. But even the diehard Cardiff fans will go into this weekend expecting Liverpool to win, so the fans and players can go there and enjoy the game and enjoy the occasion.

What do you think is Cardiff’s best tactic against a Liverpool side who are very good defensively?

Hopefully we can keep it tight throughout the game and nick a goal at the death. Birmingham did it against Arsenal last year, there’s no reason Cardiff can’t do the same!

For the neutrals who maybe are only familiar with the likes of Kenny Miller and Rob Earnshaw, who would you suggest keeping an eye on?

Whittingham in midfield is a very good player, exceptional vision and a great passer of the ball. But it’s very hard to pick out individuals – the team this year is exactly that, a team.

They’ve really grown together this season as a squad and that’s got them where they are.

Speaking of the team, they’re in a great position in the Championship at the moment – will a trip to Wembley be the perfect confidence boost for the final push?

I hope so! There’s been a bit of a dip of late, and I think that might be down to the Carling Cup itself. I think the players have known they’ve got a trip to Wembley coming up and after they’ve all been – win or lose – they can get their feet on the ground and start working hard and start to pick up point in the league.

What would promotion mean to the club?

Promotion is the number one aim this season, but obviously when Malky (McKay) came in promotion wasn’t really on the cards. But now, because of where we are in the league, expectations have started to rise again.

We’re in with a shout at second or even first – but if we don’t get there hopefully they’ll be in the mix in the play-offs.

You’re a player who has experienced the Cardiff / Swansea rivalry from both sides – Will this final mean even more to the Cardiff fans with Swansea doing so will in the Premier League?

I think so, but it’s fair to say that a lot of Cardiff fans will be enjoying the way Swansea are playing football in the Premier League at the moment! And likewise, I’m sure there will be plenty of Swansea fans who will be wishing Cardiff the best for Sunday.

It’ll be good for Welsh football, too – the National team have been doing well recently, Swansea have been strong in one of the best leagues in the world and if Cardiff could win the Carling Cup it’d be really good for the Welsh game.

And finally – we are Footy-Boots.com so we have to ask – what are your all-time favourite boots from your playing days?

It’d have to be the adidas Predators, no question – always the Predators!

Andy Legg was talking ahead of the Carling Cup Final this Sunday where for the first time ever Carling have given fans the chance to vote for how they want the final to look visit www.carlingcup.com/finalsay