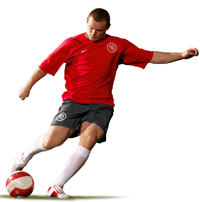 Whilst Fabio Capello continues to play pass the parcel with the England armband, one name that has been overlooked for the captaincy has been Wayne Rooney.

England play a friendly next month against the USA at Wembley and the Italian has yet to decide upon his leader. Following Gerrard and Ferdinand, it’s most likely that John Terry will take his turn, as Capello decides on a permanent leader for the national side. However, Capello might surprise a few and give Rooney an opportunity.

I am undecided who will be captain for the next game and Wayne Rooney is very young but I believe in the future he could be captain of England one day.

What are his qualities for the role? He is a leader, he is a good example on the pitch. Like I said, he is very young so we need to give him a bit more time to get some more experience and mature a bit.

But I do believe he could one day be captain. He is the most talented young English player and the good thing is he has still got a big margin of improvement ahead of him.

He is very good at everything. The one thing he can improve is the number of chances he puts away. He doesn’t convert as many as he could but I am sure that will come in the future.

Written By
Felipe
More from Felipe
Puma V1.08 gets a facelift with this new colourway Black, White, Olympian...
Read More