Forget diving, the cost of season tickets and overly-elaborate TV productions; the actual worst thing about modern football is the realisation that those brand new football boots you’ve just bought can’t be used on the artificial turf your team trains on.

You hunted high and low, spent your hard earned cash and tried on at least two pairs before finding those new wheels, now you’re only going to be able to wear them on game day rather than a few times a week?

Truly, there is no justice in the world.

Which is why one of the most common questions we get on Footy-Boots.com is ‘Can You Wear FG Football Boots on Artificial Ground?‘

Well, the answer to that changes on a case-by-case basis, but we’ve got three vital things you need to consider before you head to training in FG cleats. 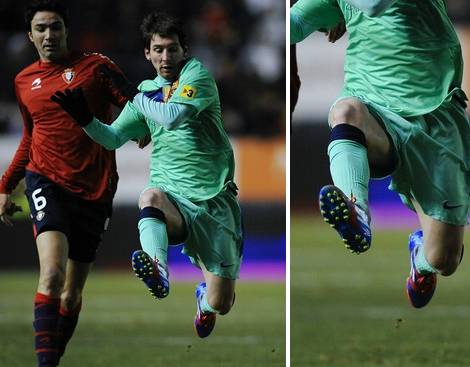 First, you need to know what type of artificial ground you’re dealing with; after all ‘artificial turf’ now encompasses a wide spectrum of field types.

If you’re playing on the newest generation of AG, such as FIFA-Approved ‘FieldTurf’, then playing in most FG releases should be fine – after all, that’s what the Seattle Sounders play on every week in the MLS and usually wear FG boots.

However, anything older and we’d strongly recommend against it.

‘Carpet’ or indoor astroturf doesn’t allow studs any level of ground penetration, meaning your body weight is concentrated into the points of the studs, which will just sit on top of the turf.

This is bad for comfort at best, but at worst could see unwanted stress put on your joints and a potential for horror slips, especially if the turf is wet.

The soleplate of your boot of choice makes a massive difference in their compatibility with artificial turf.

A little boot-biomechanics 101: it’s generally accepted that conical or rounded studs allow freer rotation of the foot on any sort of turf, whilst an FG ‘Blade’ acts more like a brake as it can’t spin on the spot.

Imagine making a quick rotation on the ball – you might start turning your head, shoulders and hips before your knee concentrates all that momentum straight down your lower leg and into the ball of your foot.

On natural ground, we know that the grass and mud will give with you (hence why you need to bash your boots together to loosen up all that trapped mud after a match) – but artificial ground won’t.

Now with that in mind imagine an oblong ‘blade’ getting trapped the turf because it can’t rotate. We don’t know about you, but it’s making us wince a little (Okay, a lot).

If you have perhaps had a knee or ankle injury in the past – or avoiding one is a priority for you – consider a conical-studded boot or AG-plate pair for games and training matches in the future. 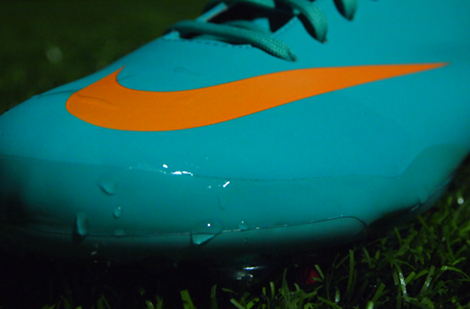 There’s an old saying about how some people are so concerned over whether they could, and never stopping to ask themselves if they should.

That’s particularly applicable to some players questions on using FG football boots on artificial ground – don’t worry about whether you can use them, worry about if you should.

Some football boots aren’t built to deal with the added abrasion and friction of playing on AG – in testing the PUMA evoSPEED 1.2 we found the finish on the front of the boot wore away after only a couple of sessions on AG.

On the flipside, some brands are doing more to make their boots more durable on this now widely-used surface – reinforcing the toe of their boots with a ‘lip’ to help reduce soleplate separation and wear (as Nike did in the image above).

If your boot starts to wear and tear after a session on artificial turf, it makes sense to stop using them. It’s more cost effective to play in the cheapest AG/Astroturf shoes you can find than have to replace your FG boots twice as fast.

Overall, we hope considering these points should help answer most people’s query when they ask Can You Wear FG Football Boots on Artificial Ground?

But the bottom line is, if you have any doubts on the turf, the soleplate, durability or any lingering worries – it’s probably well worth buying a pair of specialist boots for the surface; whether it’s a carpet-style ‘Turf’ plate or a newer version ‘AG’ plate.

Written By
Kyle Elliot
More from Kyle Elliot
How does the new CTR360 III hold up to the Footy-Boots.com test?...
Read More