There were some pictures of the actress Sharon Stone in a UK newspaper recently. Topless! The angle of the piece was ‘Doesn’t she look great for a 50 year old’. And you have to admit she did.

The dress she was nearly wearing looked expensive and the make up was flawless as was the hair do. So, here’s a question for you. If 10 women who read that article tried to re-create that picture, how do you think they’d get on? Yes, they could buy the same dress, have their make up done and their hair as well. But would they be a Stone-Clone at the end of it? Of course not.

The reason for this is simple. You need to have the natural talent in the first place (plus a bit of airbrushing if it helps).

It’s the same in football. 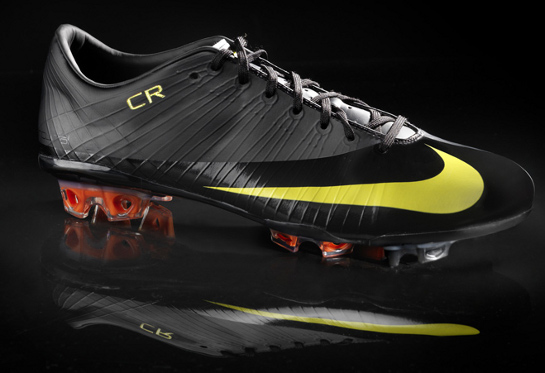 After Footy Boots ran the story about Theo Walcott being the fastest player in the Premier League, the whole debate on certain football boots making players quicker started again.

It’s easy to understand why given the claims of loads of brands regarding the attributes of their speed football boots. So many youngsters want to emulate Walcott, Ronaldo, Eto’o or Anelka that of course, they are going to be drawn to the same products their heroes wear. But they should be for the right reasons, not because they think the impossible will happen.

Let’s be clear about this. If your ultimate top speed as a player is 20 mph in proper fitting, appropriate footwear then it’s hugely doubtful that you will be noticeably quicker if you wear a different type of football boot, however brilliantly designed, light or well intentioned they may be. 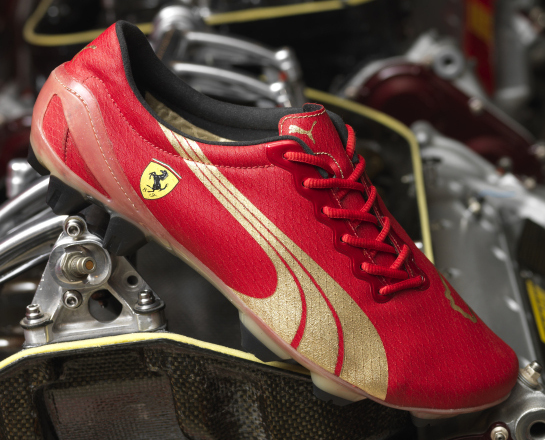 Built for speed or what? The PUMA v1.815 Ferrari

Of course I get the argument about weight. A player in a standard kit will always beat another player wearing the same kit but carrying two bags of heavy shopping over 40 metres. But we are not talking kilos here, we are talking grams.

If we agree that an average player weights 80 kilos, a 200g pair of football boots represents 0.25% of his body weight. Equally, a 350g pair of boots would come in at 0.44%. And in today’s football boot market place, that’s a pretty big gap.

If we also agree that this player can cover 40 metres in 5 seconds, then the advantage that the lighter boots give him is..one hundredth of a second. That may make a difference in an Olympic 100m final but on a football pitch, I’m not so sure.

Indeed, others will argue that the heavier boot gives a player a better platform to overcome inertia, just as sprinters use blocks on a track rather than going from a standing start. So, any advantage the lighter boot has over the ground will have already been negated before a player reaches sprinting speed.

By way of an experiment, and one which I accept was completely and utterly unscientific, I tried this weight theory out for myself.

Being a lumbering defender and using the lightest football boots I posses, the Nomis Spark, I ran 20 metres from a racing start on 3 occasions.

I then repeated the process in the heaviest boots in my locker, my trusted open-side flanker rugby favourites, the Nomis Supremacy. Now, my sprinting speed has been compared to that of a depressed hedgehog on valium. Usain Bolt hasn’t got anything to worry about. But the results were at least consistent. And there was no discernible difference over the 6 runs.

By way of a control, I also ran the same course in a pair of PUMA King XL’s, adidas adiPure II’s and finally the PUMA v-Konstrukt II.

Apart from getting a few strange looks from the hairdressers and dry-cleaner’s across the road, nothing. Nada. The times were virtually identical.

In the end, I suspect that it all comes down to perception and psychology. If you feel than you can run faster in one pair of football boots rather than another, then great. That’s maybe the edge you are looking for. And who knows, for players at our level, that could be enough.

So, if in your mind this means that some football boots can make you quicker, then so be it. I can live with that.

But I also know that if I walked down the local high street in a torso hugging T-shirt and jeans, not many people would mistake me for Jude Law! In the end, I’m convinced that life in general and football as a part of that all comes down to how you are built and what natural ability you possess.

Mind you, I did feel special in those bright red Nomis boots! Oi Jude. Over ‘ere son. First one to five?

Written By
Felipe
More from Felipe
The latest adiPure II looks to have ticked all the boxes and...
Read More