It’s rare that a club’s coaches provide us with a boot-spot to feat our eyes upon (though Jose has been known to get the occasional new colourway ahead of release!) but Liverpool gaffer Brendan Rodgers has given us good cause to get our binoculars out as they’ve been breaking in another new Warrior football boot. 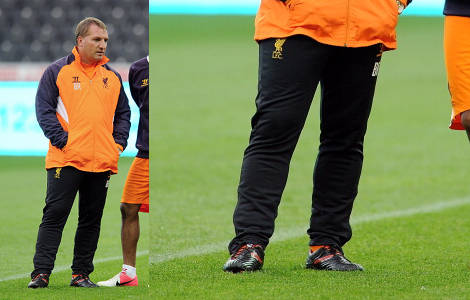 Following on from Gary Hooper’s reveal of a black-out prototype pair of Warrior’s forthcoming release, the former Swansea City Manager – and many of Liverpool’s other members of coaching staff – have all taken to the training pitch this week in a new Warrior boot.

The as-yet-unnamed boot comes in an understated Black and Bright Red/Orange colourway – reminding us a little of the Black/Warning adiPower from last year.

Unlike the Synthetic & Rubber prototype in the hands of Gary Hooper last week, Brendan Rodgers’ pair seems to be a classic black leather boot – something many boot fans will surely approve of. 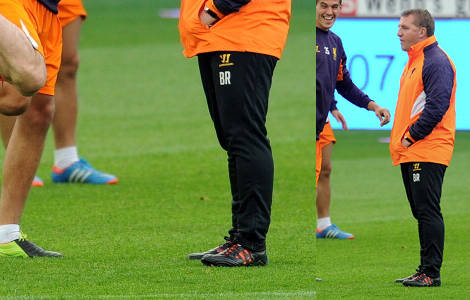 Rather than being a heritage-focused boot, these Warrior cleats look to have a very modern design to them. So think something closer to the Pel' Sports 1970 or Mizuno Morelia Neo than an adiPure or Tiempo.

Spotted by our Twitter-bro @MuleNewton, Brendan’s boots feature a side-offset lacing and heavily stitched upper – certainly reminding us of a range of different boots, and this Warrior release seems to have all the hallmarks of a great release. Speaking of which, with the boot appearing in non-blackout form – just how long until we get something official from Warrior themselves!? 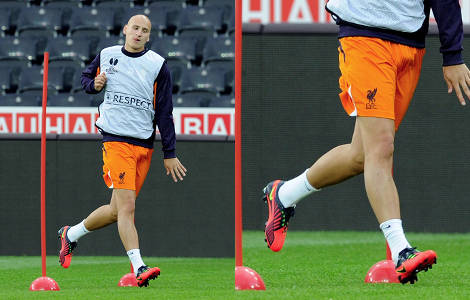 A long time proponent of the adidas Predator range, we were surprised to see Shelvey wearing such a conspicuous pair of boots from Nike – but then again, we’d imagine blacking a pair out in this colourway would be a serious challenge!

Expected to be the next entry into the T90 Laser range, you can look forward to a full release of this colourway on Footy-Boots.com next week!

Written By
Kyle Elliot
More from Kyle Elliot
Zlatan Ibrahimovic is the latest top footballer to reach for the sharpie...
Read More