Revealed at Nike’s Make History event in London, Brazil’s Home shirt got it’s debut at the Emirates Stadium in a friendly against the Republic of Ireland in March.

Worn by Samba superstars including Robinho, Kaka and Lucio. The classic yellow and green jersey inspired the 5 time World Cup winners to a 2-0 victory over a determined Republic of Ireland squad. 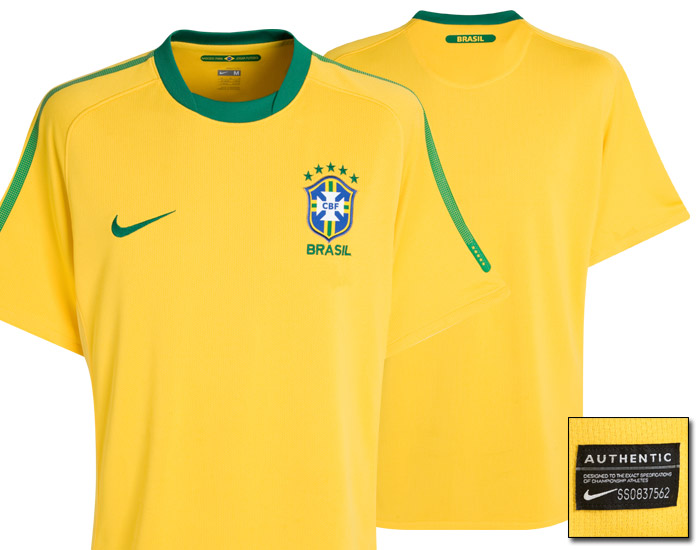 Also revealed this past week is the away shirt, which Brazil will wear should a change be required. The away shirt is a Varsity Royal Blue with Yellow trim. Favourite features here in the office include the contrasting yellow collar, and the geometric pattern of spots across the chest is a nice addition too! 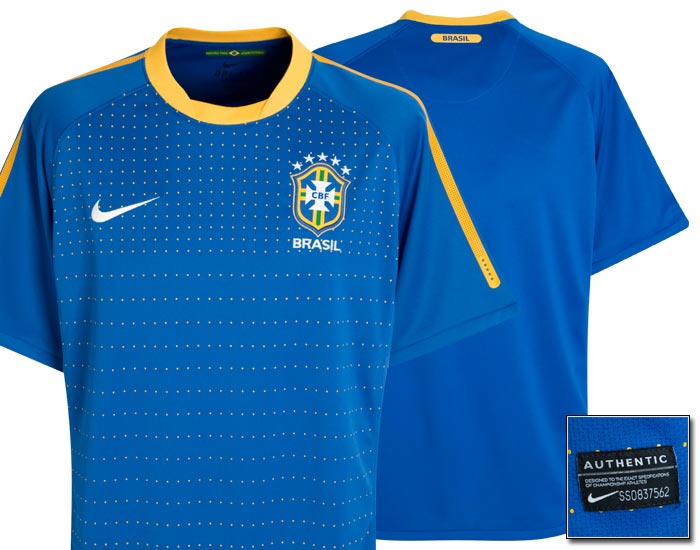 As well as being made from recycled materials (which we revealed before) Nike say the shirt posts the following technology:

Improved Nike Dri-Fit fabric, now 13 percent lighter than previous Nike kit fabrications, helps keep players dry by drawing sweat to the outside of the garment where it evaporates. Ventilation zones have been placed on each side of the jersey to enhance breathability, and are combined with a fabric that increases air flow by up to seven percent compared to previous kits. Air can now pass across a player’s whole torso, keeping him cooler. These ventilation zones consist of up to 200 tiny laser cut holes which are backed by Nike’s innovative halo application. This treatment prevents ripping without reducing air flow.

The Nike kit shorts also have additional ventilation zones placed below the waistband and near the base of the spine, so this area prone to high sweat levels will now be significantly drier.

The jersey’s new double knit structure not only gives it a sleeker appearance, while offering 10 percent more stretch than the last Nike national team kit jerseys , but also boasts a new dynamic fit'  cut to follow the natural contours of the body while still allowing for maximum airflow and movement.

Written By
Felipe
More from Felipe
As Nike announce that their players will wear brown football boots at...
Read More