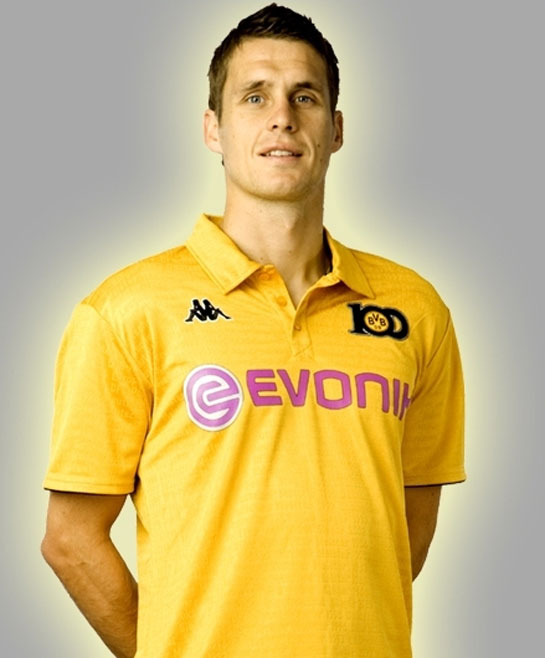 In the presence of numerous BVB Stars the extraordinary outfit was presented in Borusseum. Following the “Golden Decade” of BVB, Kappa and Borussia have decided to develop a special jersey which shows their achievements.

The classic design of the anniversary shirt is inspired by the legendary floodlight shirts used in 1963, in which BVB, defeated Benfica 5-0. “With this special design, we would like to congratulate BVB with their anniversary and relive the amazing history of Borussia Dortmund,” said Cornelia Schmidt, managing director of Kappa GmbH Germany.

Meanwhile in Spain, Gibraltar based gaming company William Hill and Malaga CF have signed a sponsorship contract for the next three years, where the William Hill brand will be displayed on the front of the Malaga CF shirts. The new sponsors will also have major brand presence at Malaga’s home ground, La Rosaleda.

The prestigious gambling company has 75 years of history. It has over 15,000 employees and serves customers from 175 countries across the world.

The agreement strengthens Malaga CF’s relationship with the British and Irish communities on the Costa del Sol, whilst William Hill associates itself with a La Liga Club which shares the same goals: to keep on improving every day and to be the best.

The Andalusian club start their La Liga season with a home match against Atletico Madrid on Sunday.

Henry Birch, CEO of William Hill said: “We are delighted to have come to this agreement with Malaga FC. Malaga is the closest La Liga club to our business base in Gibraltar and we really wanted to be involved with a club that we could support both from a business perspective and in person to share the passion that La Liga generates.
As well as the huge Spanish fan base on the coast, we know that Malaga also has a huge ex-patriot following in this part of the country, a legion of supporters who already know the William Hill name and we hope that this sponsorship will bring the brand to the fore with the legions of football fans from all the clubs across Spain.

When the ‘Anchovies’ play Barca or Real, we won’t be the underdog, we’ll be here to watch them surprise the big guns!”

Fernando Sanz, President of Malaga Club de Futbol said: “For our Club, this is a great honour to have been selected by such a well-known and respected company as William Hill. Especially, when this is the company’s first sponsorship with a such high-level competition such as Primera Division.

Malaga CF has been related for a long time with the British and Irish communities. A month ago, our team played against Everton at Goodison Park and we have also held an Under 21 England National Team match in La Rosaleda. With this agreement, we go up one step again in our relationship with the British community in Costa del Sol”.

For all the other main stories about football shirts visitFootballShirtCulture.com

Written By
Felipe
More from Felipe
Chelsea have had a 'come and get me' cry from Hamburg's Dutch...
Read More