With Nike and Adidas flooding the media with marketing dollars in the way of endorsements and bold advertisement stunts, noticing a boot on sheer performance can often be difficult. 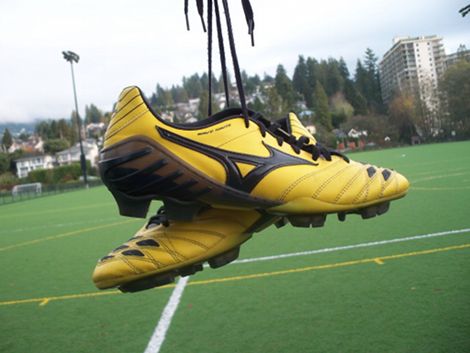 But this year, Mizuno seem to be getting some recognition – producing one of the top 3 football boots of the year at this years Football Boots Awards is proof that a good boot is what the public are after, not just a professional endorsement and flash advertising campaigns.

We covered the Wave Ignitus not so long ago, so I was keen to see how it’s little brother – the Mizuno Wave Ignite stands up to compare. Is this boot good enough to forgo a sizable marketing budget to achieve recognition? Will the Ignite burn red hot for seasons to come or just fizzle out when the World Cup spotlight vanishes? Let’s find out… 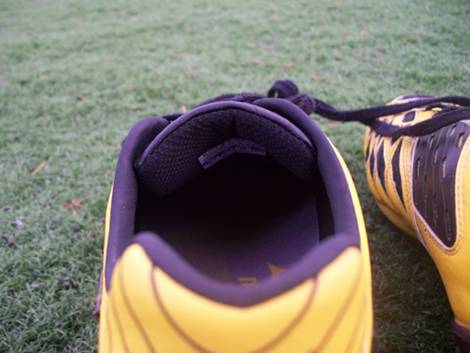 The soleplate can feel stiff at first but does loosen up after the first couple of wears. The first thing you™ll notice upon lacing the Mizuno Wave Ignite will be how thick and padded the tongue feels. The heel and collar padding add to the comfort during direction changes, giving the Mizuno Wave Ignite a responsive yet plush distinction. The soleplate and stud configuration does quite well on spreading the stud pressure throughout the sole, creating an ergonomic fit with the sole of your foot.

The upper feels soft but would probably feel much softer if it lacked a few panels here and there. There™s only a small section on the outside of the foot “ located under the large Mizuno logo “ that escaped a panel of some sort. The upper moulded closely with the movements of my foot after roughly 2 weeks, exceeding my expectations from the synthetic upper on these football boots. 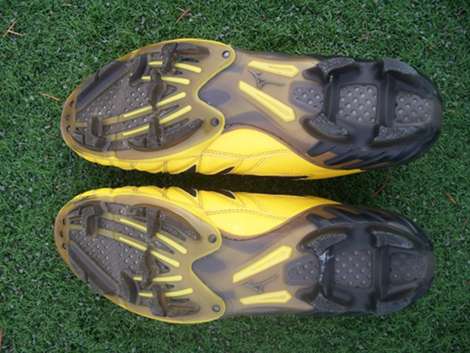 Based on the numerous panels and the Mizuno Wave Ignite™s overall construction, it would be a fair assumption that this boot would excel in this category. Artificial surfaces (3G Turf, etc.) can blemish the bright yellow exterior that captures everyone™s attention, wanted or otherwise. There are a couple black marks on the yellow upper that simply won™t come off – which is a real shame.

Other than a few black marks scattered along the boot, the Mizuno Wave Ignite feels like it has stood the test of time on multiple surfaces. There are no signs of fray stitching or any other defects that would cause concern, with the 360 Degree Bio-Panels taking the brunt of the striking and tackling abuse.

The Pebax-constructed heel counter on the Mizuno Wave Ignite feels extremely solid and has held up to the toughest of challenges, amazing when compared to others boots in its weight class. Usually boots that set their sight to break the 8 ounce barrier neglect aspects of comfort and durability but, this is hardly the case with the Mizuno Wave Ignite. 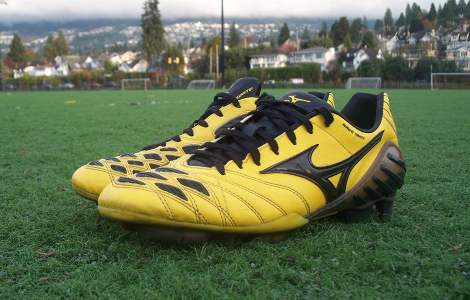 I™m not here to mince words so I think the word ˜artificial™ is the best adjective for this section. Don™t get me wrong “ the power generated from this boot feels outstanding “ yet I admit the touch was disappointing. First of all, the power and spin generated from the Bio-Panels are huge positives when you™re striking the ball.

These attributes accompanied by the rigid soleplate of the Mizuno Wave Ignite feel like a ˜dream come true™ for free-kick takers and power-hungry attackers.

However, all this power and spin comes at the sacrifice of some touch and feel. Passes and crosses rarely escape spin, which can lead to accuracy problems from bounces on firm pitches and artificial surfaces. It can be tough gauging finesse through-balls with 18 power/spin panels covering the majority of the striking surface of the Mizuno Wave Ignite. This is where I expected the Mizuno Wave Ignite to simply lose steam so this wasn™t much of a surprise.

This give-take relationship is common with design “ Mizuno simply had to compromise to provide something for everyone’s taste in football boots. For what it™s worth, I believe the added power and spin makes up for the slight lack of touch. Another positive note is the water-resistant qualities of the upper, my main reason for choosing this model over the K-Leather Ignitus. The Mizuno Wave Ignite locks out water while the boot™s upper does not absorb moisture, keeping your feet light and dry.

We™ll save the most obscure for last “ the ˜Mukaiten™ or no-spin panel. The panel is located high upon the instep to effectively take off the spin of a shot to give the knuckle effect, using the proper technique. This technique can be tough to master and can feel very awkward at first, but that won™t stop you from trying to hit knuckling free-kicks until exhaustion. Personally, the Mukaiten panel is outside of my natural striking motion so I try to avoid relying on the panel as my go-to weapon. 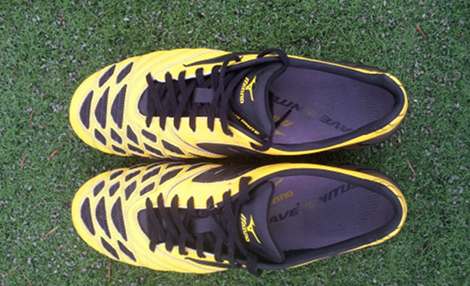 This boot feels tailor-made for the attacking midfielder and/or striker, while I could see many other positions reaping the benefits from this well-constructed and protective boot. The overall package is tough to match “ the weight, traction, and power “ especially for the modest asking price.

The Ignite is a serious contender to the adidas Predator_X and Nike T90 Laser III, providing many of the same attributes in a differently presented package.

The reduced feel from œpanel-overload is my only complaint (a relative issue, at best), even though the other positive aspects of the panels could cancel out that one drawback if you should find that a non- issue. After wearing this boot for a while, you do tend to gravitate back towards something different – with a touch and feel focus “ myself, the Nike CTR360 Maestri is a steady go-to “ when searching for an alternative feel.

I wasn™t too happy about the bright yellow colorway at first but I soon realized that this prompted questions from other players, giving the appropriate opportunity to explain everything the boot has to offer. The bright yellow colorway of the Ignite is the most effective and efficient marketing for Mizuno, current users being asked to explain why they wear this particular boot out of all the other boots on the market.

The Mizuno Wave Ignite has all the trappings of a power boot on a diet, which is no surprise considering the industry-wide push to lower boot weights across the board. The Ignite boasts a page full of gimmick-sounding technology that actually works well together, a rare occurrence these days with such a push for innovative technology every couple of months.

I believe the Wave Ignite represents the tipping point of features from Mizuno, as they will continue to generate new and exciting technology to revolutionize the œpower boot range as we see it today.

Written By
Kyle Elliot
More from Kyle Elliot
It's a fresh new look for the Puma evoSPEED 1 as this...
Read More