Puma have had an exciting start to the season, netting top talents like Sergio Aguero and Thierry Henry to wear their football boots.

But their revolution seems to coincide with the June reveal of the new Puma v1.11 & v1.11 SL, so we thought we’d take a pair of the v1.11 Synthetics for a spin to see what the fuss is all about. 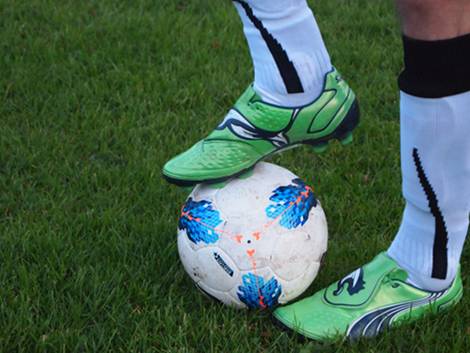 Comfort and Fit, for me, are the two single most important aspects of a pair of football boots – and Puma have continued to impress me since the K-Leather v1.08 (my first ever Puma boots) two years ago.

The Puma v1.11 continues Puma’s hot-streak in this department, as long as you know what to expect from the boot. The refined AptoLast system now gives a little more room in the toe area, but the midfoot is still super-snug, so it’s well worth considering a half-a-size up increase for the mid-to-wider footed amongst you.

The other brilliant thing about the fit of the Puma v1.11, is now that the v1.11SL is out, Puma have been able to make a speed boot for people who don’t normally like speed boots. 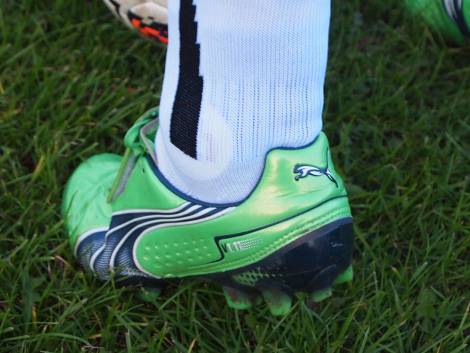 Now, that might sound a little crazy, but football boots like the Superfly III and adiZero pride themselves on single-layer synthetic uppers, with little-to-no heel counter or foot protection.

On the, Puma v1.11, however you get a full compliment of features that are absent on more stripped-down speed boots; a nice big lace-cover, one of the most solid heel counters on the market in Puma’ UNi system and a soft and supple upper that still tips the scale at around the same mark as the Superfly III. 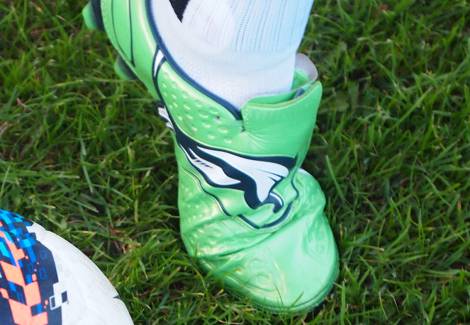 The last football boots I had the pleasure of testing were the excellent Tiempo Legend IV Elite, and no matter what the next boot to arrive at Footy-Boots.com HQ was, they were always going to be a tough act to follow in this department.

So, it’s pretty impressive that a synthetic number like the Puma v1.11, can come along and score so highly.

For starters, the upper has this lovely ‘jelly’-like feel to it. Rather than the tough, papery Teijin of the Superfly III, the Puma v1.11 take little or no breaking in, and crease and bend with every movement of the foot, providing excellent ball feel. 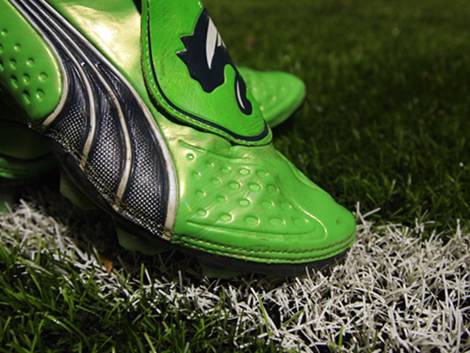 As mentioned before, the middle of the boot, under and around the arch, is very narrow. Whilst this sounds unpleasant, what is actually means is the instep very closely follows the shape of the foot, making slotting passes and trapping the ball a very easy experience.

One thing I will say, though, is they do take some getting used to in the wet. The upper does have some grip thanks to the distinctive holes that are dotted across the forefoot, but it still doesn’t compensate for the near-frictionless synthetic upper when playing in a downpour. 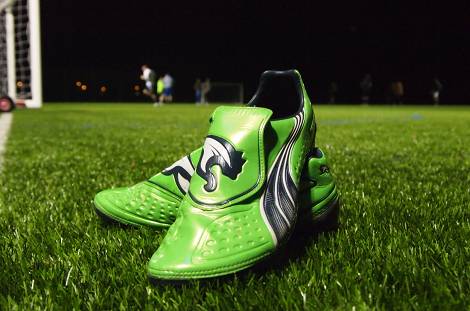 Divisive is the word that I would use to describe these football boots. Whilst many love the sleek look of the Puma v1.11, highlighted in Fluo Green, other members of my team thought they were a but much.

When thinking about the design of these cleats, I’m forced to think of just how much an improvement the v1.11’s are over the v1.10 – which featured somewhat schizophrenic marriage of canvas and synthetic leather, held together with more stitching than one would expect to find in the Bayeux Tapestry – which bumps their score up a little. 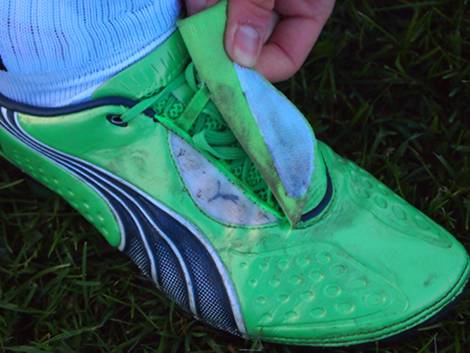 Thanks to the aforementioned frictionless design of the upper, keeping these football boots clean is next to no effort.

The solid construction of the sole is all transparent plastic and Carbon Fibre, meaning there’s no danger of any elusive patches of mud eating away at any exposed material and the upper itself is essentially wipe-clean.

The one thing that stops the Puma v1.11 getting a perfect score in this department is the lace cover. Not so much the cover itself, but the velcro that holds it in place. Once that small patch of material is sullied, there is little you can do to get it looking as pristine as the rest of the boot again! 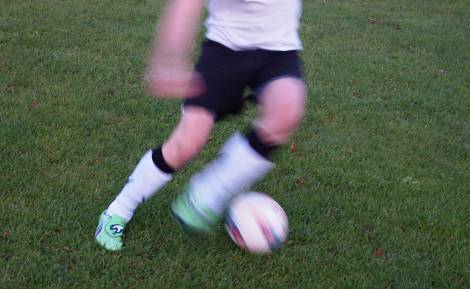 As mentioned in the ‘Feel’ section, passing in the Puma v1.11 is exceptional, so I won’t dwell on that.

Instead, I’d like two aspects of the boot I found a little contrasting; shooting and crossing.

Crossing in the Puma v1.11 is something I really fell into the groove of quickly; the secure instep and huge surface area (afforded by the lace cover) meant getting a solid connection was never a problem. 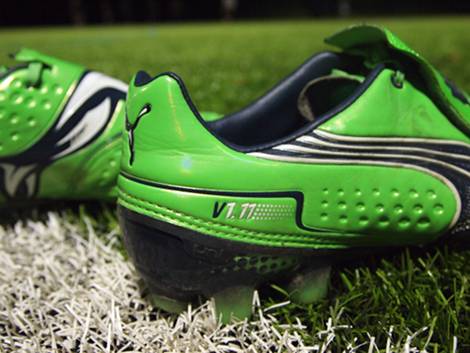 Shooting, did take a little getting used to, though. Wheras most football boots taper to a point to accommodate the toes, the Puma v1.11 sort of bulb out from the narrow midfoot into an ergonomic foot shape.

So, when you look at the boot from above, they’re almost like a racquet or shovel with a huge surface area to connect with when hitting the ball head-on.

This means you have to adjust your technique a little from most traditionally-shaped football boots, lest you send a shot rocketing into Row Z. It’s not something that’s good or bad, just simply different. 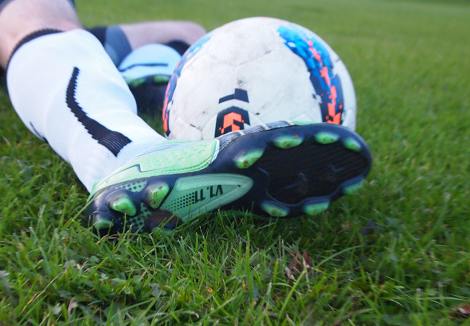 At £134.99, the Puma v1.11 is actually a few quid cheaper than it’s counterparts, slipping neatly below the £150 ‘average’ price barrier that has been set by new releases from Nike & adidas.

Also – and you have to whisper this last part – unlike the quarterly releases from other brands, Puma tend to launch a new colourway almost every month, meaning that the price for launch colourways tends to drop pretty rapidly 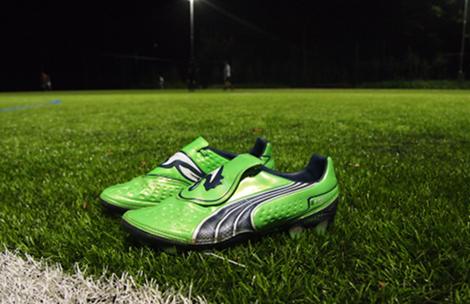 Like I said in the opening section, the Puma v1.11 is the speed boot for people who hate speed boots.

Traction is exceptional, fit and comfort are above expectations and the feature set (things like heel-counter, AptoLast, lace cover, etc.) are incredibly well utilised for a boot that weighs just a hair over 230g.

Whereas others in the category like to strip back, bringing as little as possible between your sole and the ground, and even less between your toes and the ball – these Puma football boots instead augment and envelop your feet

Any more questions about these football boots?

Drop them in the comments and I’ll do my very best to answer them!