After the retro-appeal of the Speciali and the new England kits, it seemed an almost uncharacteristic move by Umbro to bring out a football boot as technology-focused as the GT Pro. 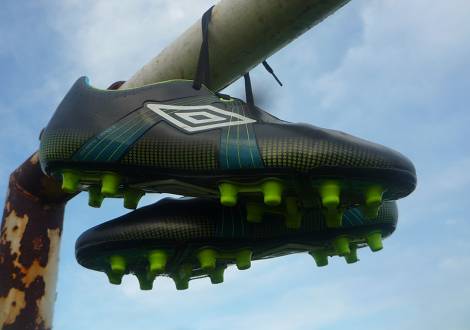 Lightweight, but not light enough to challenge the sub 200g category of speed football boots, the Umbro GT Pro focused on it’s speed and an endorsement from Darren Bent.

Unfortunately, Bent has only played a game and a half in the Umbro GT Pro, but the football boot has dropped in price faster than Bent can type a Twitter message.

The top end boot was released at a recommended retail price of £89.99 – not bad compare to some other boots out there, namely the Nike Vapor and F50 AdiZero.

So, we set out to answer; Is the GT Pro a misunderstood great, or would we be better putting that money into a more expensive pair of football boots?

Having heard the claims and shouts coming from the Umbro PR machine about the GT Pro, we were looking forward to great things from Umbro’s lightest football boot – but rather than the out-and-out comfort we expected, we were let down.

The main issues were around the ‘collar’ of the ankle. The cut of the collar means the GT Pro ‘pinches’ when you pull the boot nice and tight while you play, causing serious displeasure. Don’t get me wrong, I’m not suggesting the GT Pro was vice like, but it was enough to make me take notice.

Over time,'  the synthetic upper does start to become slightly more forgiving. Either that or the calluses that built up as a result of wearing these boots were preventing further pain!

Normally we find Teijin synthetic is soft and supple enough to break in easily around areas of high usage, like the ankle, not in the GT Pro.

One of the best features on the GT Pro is the A-Frame cradle. Whilst I was certainly disappointed in the A-Frame not being entirely separate from the rest of the upper, like on the Speciali, I did feel it’s benefits in midfoot support.

The boot is snug to the top of the foot (more on that later…) and your foot doesn’t really ‘move’ inside the GT Pro, it’s held steady and won’t slip under foot, even on tricky ground.

Two last points on the fit of these football boots – I personally, think they’re a solid ‘true to size’ fit, so no need to buy half a size up or down. And, finally, even with the A-Frame Cradle allowing a decent amount of mid-foot adjustment, I don’t think the GT Pro would be a good choice for those with wider feet.

This department is where the GT Pro becomes a very polarising soccer boot.

I’ll start with the positives first; in one of the biggest surprises of all the football boots we’ve had the honour of testing here at Footy-Boots.com, the GT Pro is a joy to strike the ball in.

The ultra-thin tongue and flat laces mean that you can really make a solid connection with the top of your foot and the ball. From standing or volleying, there’s something wonderfully simple about smashing a ball with the GT Pro.

Second, the benefit of the tightly-fitted instep is that the instep passing is a real breeze – that said there’s very few football boots at the moment which aren’t any good to pass the ball in.

However, I just couldn’t start to like the GT Pro as a ‘decent’ boot, no matter how long I played in it. Whilst in the ‘Comfort & Fit’ segment I mentioned that the upper is Teijin synthetic and uncomfortable, it’s also quite thick around the toe end (compared to the awesome paper-thin tongue) and most annoyingly – nearly frictionless.

Whilst you can’t blame the football boots for a poor first touch, when the ball’s at your feet and you’re trying to bustle through a defence it’s difficult to really get a feel on where the ball is in relation to your foot.

Compared to say the Superfly II, where the upper’s so thin that after a couple of wears you really start to get a feel for the ball, the more ‘Jelly-like’ GT Pro Upper is much less responsive.

As for that ‘re-enforced’ area on the inside of the toe area? I’m not really sure what that’s there for at all – it doesn’t make much of a difference to much of anything!

As we couldn’t work out why it is there, we'  looked on Umbro’s promotional material, they don’t mention it once, even though it sticks out like a sore thumb on the boot’s design.

The GT Pro isn’t a bad looking cleat. We used the Black/White/Volt version, and the contrasting fades on the ‘main’ part of the boot and the blue of the A-Frame Cradle are neat touches and add to the ‘futuristic’ design direction of these football boots.

The design on the soleplate is very ‘Tron’ and the veins of green in the A-Frame Cradle are reminiscent of wires, again tying the football boot into the theme nicely. Whilst it might not be everyone’s cup of tea, the boots are understated enough for those who don’t want to draw attention to themselves and at the same time, have enough nice aesthetic touches to get people talking.

When it comes to looking after your Umbro GT Pro, you’re in for a really easy ride.

The smooth upper is easy to clean off with little hassle, and the soleplate is very easy to get back to ‘new’, too.

Overall, the' Umbro GT Pro has very little downsides in this department, and feels downright indestructible in your hands.

The thing tongue of the' Umbro GT Pro translates into a fantastic shot on the ball.

A narrow piece of Teijin synthetic leather and a shoelace are all that separates your foot from the ball, which translates the power from your strike into the ball almost seemlessly.

Despite not being the lightest ‘speed’ boot on the market, the Umbro GT Pro does feel very liberating on your feet, thanks to the one-piece upper. The soleplate doesn’t quite offer that ‘complete’ sense of speed like the adiZero or Superfly II do, as it’s more-or-less the same sole as the Speciali.

As mentioned before, I don’t really like the touch that these football boots offer, however the basics like shooting and passing are really a joy.

The GT Pro is ludicrously cheap at the moment for a ‘top-level’ pair of football boots, with some colourways available for under £30.

Whilst I’ll be the first to admit that the isn’t' Umbro GT Pro the best pair of football boots I’ve ever worn, the features it offers for the price you can buy it at is exceptional.

If you’re a speed- merchant who’s after a pair of ‘winter’ football boots that won’t let in much water over the coming bad weather, you could do a lot worse than dropped a few quid on an SG pair of GT’s.

Written By
editor
More from editor
We put Umbro's attempt at a Speed Boot to the sword in...
Read More