adidas’ adiPure range may have only been introduced 5 years ago, but it already feels like an old-hand in the marketplace. All three of it’s previous generations have garnered praise, and sales have been strong enough to bump the adiPure up to a yearly renewal, keeping the range fresh. 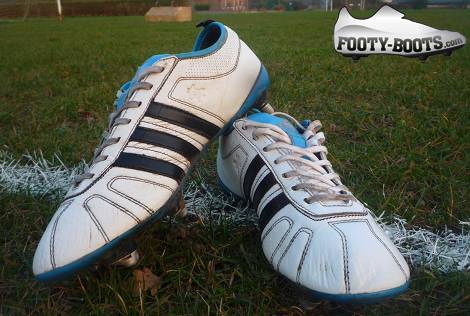 There’s no doubt that this year’s renovation, the adiPure IV, is one of the biggest to hit the series in some time. A revamped old-school look, centralised lacing and tongue, and the lightest adiPure to date make the classically-styled football boot a tasty prospect.

But how does that work out in practise over theory? It’s time for another exclusive Footy-Boots.com test to find out!

To kick the review off, so to speak, I’d just like to point out that adidas very kindly supplied the adiPure IV in both our regular sizing and half a size smaller than usual – and after having a run out in both, we decided to continue the testing in half a size down.

Whilst there was more of an initial breaking in period, I’m certainly glad we made this choice as the adiPure IV has a fit unlike any other football boot on the market.

The last on the adiPure IV is reasonably narrow (again, just to point out that it was more narrow than usual thanks to the smaller size), but what this does mean is that there’s a feeling of midfoot support that I haven’t had from many football boots. In a strange sort of way, the adiPure IV fits more like a speed boot, with a secure heel section and snug arch support that reminded me of the Mizuno Wave Ghost and the Superfly II.

The whole football boot has a similar feeling of snug security, as at the toe end of the adiPure IV you can really feel the cushioned leather and lining of the boot, giving the cleat a comfortable yet responsive feel when running and turning.

Almost certainly, the last and quality of the leather are to thank for such desirable qualities; however the new tongue is a stand out for me. Having been a fan of the original adiPure (you can see my trusty battered Telstar II’s in some of the photos!) I’m thrilled to report that the adiPure IV returns to that same ‘tight to the top of the foot’ feeling that comes with a slightly cushioned, central tongue.

If you’ve got wide or sensitive feet (that is to say, some sort of pre-existing condition, like a break that hasn’t healed 100% properly or some sort of killer bunion) then the new adiPure will fit you true to size.

But, if you’ve got narrow-to-average feet, I’d recommend going half a size down and spending a couple of training sessions breaking them in. You won’t regret it.

As mentioned, the narrow shape of the the adiPure IV’s, top-notch leather, central tongue and lacing work together to give you a really ‘one-to-one’ feeling with the ball.

Admittedly, during the first couple of training sessions the leather was a little stiff and wasn’t as supple as you might think it should be, and the polyester lining on the inside of the boot also needs a couple of run outs to stop being so tight to the leather, but all this will be forgotten quickly as the adiPure IV’s leather begins to mould and shape to your foot.

In wet or dry conditions, the adiPure IV makes pinging passes off the instep, striking with the laces and controlling the ball a real breeze.

Something of an optical illusion, the adiPure IV looks really ‘boxy’ when it’s sat on a shelf or on someone’s feet, but when you hold it in your hand it’s as contoured and shaped as something like a Mercurial Vapor.

I think a lot of it is to do with the unusual stitching on the toe, and the re-arranged stripes on the outsole, but the whole football boot seems long and angular in every shot I’ve seen of it.

But when it’s in your hand, the whole boot looks curved and formed as you’d expect a top quality boot to be. If adidas could convey this same sense of craftsmanship whilst retaining that 1950’s charm afforded by moving the famous three-stripes closer to the toe, I think the adidas could be close to a perfect-looking'  pair of football boots. 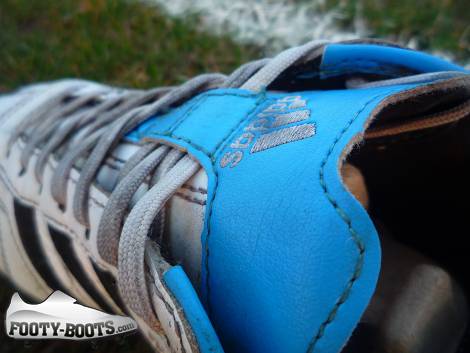 Even though I tested the White/Black/Fresh Splash adiPure IV, I still found them to be as low-maintenance as most other leather football boots. Which is to say, ‘kind of’.

The white leather seems to look better and more creased every time you clean them, and the soleplate has so fewer crevices and contours there’s very little chance of any mud getting trapped in there.

As with all white football boots, however, there will always be a few sections you’ll never quite get clean after the first wear – with the white stitching and laces particular culprits when it comes to getting irreversibly tarnished.

The leather does tend to crack through the white veneer after only a couple of uses in the rain, too. On one hand, it can give your boots a comfortable-looking, grizzled appearance that some players will love – on the other, many will worry about how they look after a month in the wet and there are concerns over long-term durability.

In short, if you’re going to be playing in the adiPure IV in wet – it might be best to invest in the Black version.

As mentioned in the ‘feel’ section, the adiPure IV is a versatile, all round football boot that does just about everything a football boot should.

adidas has put a heavy emphasis on the weight reduction on this adiPure IV (then superseded it with the adiPure SL!), but I didn’t notice that they felt super light whilst playing – and only the most stringent of gram-counters will. In short, the weight isn’t important to the performance of the adiPure IV.

There’s a simple elegance about the big instep, outstep, and toe areas that let you get a good contact with the ball – and the real magic is how close the whole of your foot is to the upper, giving you a great feeling of control.

One thing that didn’t click with me, though, was crossing in the adiPure IV. Whilst normally I have no trouble getting the instep of my foot under the ball to generate whip and spin, in the adiPure IV I found it much harder than in every other boot I’ve worn.

Instead, it was much more consistent to ‘punch’ the ball into the area with the area just inside my big toe, whether this is a problem with my technique or the shape of the boot, I’ll let you decide (I’m betting most of you go with the former!).

It’s no secret that the adiPure IV brought with it a £10-£20 price hike up to the £120 mark, but in the world of football boots – higher prices seem to be something of a trend.

The adiZero received a new price tag to go with it’s new upper and the Predator_X and v1.10 were both pushed up in price for seemingly no reason.

So, in a stable of other adidas football boots that range between £135-£210, I’d have to say that the adiPure IV does offer more than a semblance of value for money given the overall quality of the materials used and versatility of the boot.

But in a market place where Nike have knocked £30 off the price of one of their most popular football boots, Umbro launched the new Speciali R for £80 and adidas themselves produce the Copa Mundial and World Cup for around £70, the adiPure IV is still a way off being a truly great value-for-money cleat.

There’s one line I used earlier in this review that really sums up the adiPure IV, and that’s that it “does just about everything a football boot should”.

You could bring a player from 50 years ago forward in a time machine, and they’d still know exactly what the adiPure IV is about and what it should do, it balances the new with the old, the innovative with the tried and trusted and is a cracking pair of football boots for it.

Whilst the adiPure IV won’t win over many new fans to the range, it’s the perfect boot for players who are looking for simplicity and excellence.

Written By
Kyle Elliot
More from Kyle Elliot
The Canaries reveal their all-new home shirt for the 2012-2013 season -...
Read More