The traditional curtain raiser to the English football season lived up to its high billing and produced a scintillating spectacle, on two counts. 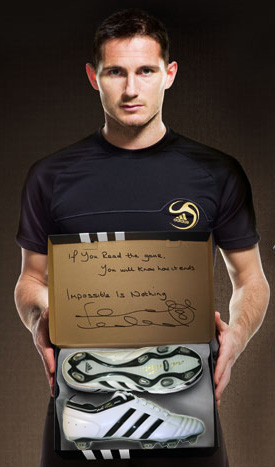 Chelsea took the Community Shield on penalties in a game packed with excitement. Frank Lampard was the Footy Boots star man, for his efforts during the game and afterwards.

After a couple of months away from football, a game like yesterday’s Community Shield was exactly what the doctor ordered.

United started the game like they meant business and when, 10 minutes in,'  Nani cut in from the left and struck past Petr Cech, United must have felt like they would breeze through this game.

After the break, the game really kicked in and on 52, Chelsea drew level. Malouda crossed, Drogba charged towards Ben Foster in the United goal, perhaps forcing Foster to punch straight into Ricardo Carvalho’s path, who was left with a simple header.

Chelsea’s second with 20 minutes to go was hotly contested, particularly by Alex Ferguson after the game, but the goal stood. Drogba’s good work set up Footy Boots Star Man – Frank Lampard, for a well struck shot in his adiPure II football boots, that Foster could only get a hand to.

Almost at the death, Wayne Rooney provided a composed finish to level the game once more and push the game into extra time.

Lampard, Ballack and Didier Drogba all scored for Chelsea, whilst only Michael Carrick could find the back of the net for United. Ryan Giggs and Patrice Evra were saved by Petr Cech before Salomon Kalou completed the penalty win for Chelsea.

An eye for an eye, a boot for a boot.

Some girls love to receive chocolates or flowers, but a brazen ‘booty’ seemed chuffed to be presented with Frank Lampard’s 90 minute, odour ridden football boots.

She was of course picked out of the crowd to recieve her trophy as she caught learing Lampard’s eye by removing her top. Revealing her ‘bootiful assets’ to the 86,000 people at Wembley stadium.

Nice to know that 90 minutes of running around a pitch doesn’t dampen Lampard’s eye for the ladies.

Written By
Felipe
More from Felipe
Puma have recently released a new colour way in its V3 football...
Read More