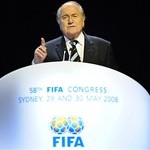 Fifa President Sepp Blatter has again expressed his fear that the Premier League is damaging the game of football worldwide.

Blatter says he also believes that with just 4 winners of the Premier League since its inception, there is a power inbalance within the English game. And, in a wide ranging interview, he has repeated his concern that there are too many foreign players making their way to England.

Blatter recently went on record criticising the amount of foreign talent being used by the four English sides in the Champions League, though it’s since been proven that many of the figures he used to justify his remarks were wide of the mark.

I have my concerns because the Premier League is the strongest in the world, definitely.

It is taking over in such a manner that the other leagues have difficulties to match it.

In a competition where two-thirds or three-quarters of the participants in the league play not to be first, but not to be relegated, there is something wrong.

On the subject of foreign players and overseas ownership, Blatter said he would be talking to Premier League supremo Richard Scudamore saying:

I want to try to, if not persuade him, then at least influence him in his thoughts that to have a minimum of local players will enhance the quality of his league.

Foreign ownership is definitely a risk, it is not the basis of football, but here we can do nothing.

At the moment in the economic crisis, maybe the big investors and the big companies, will have less money to go in than local or regional investors who will be there because they identify themselves with the club.

Written By
Felipe
More from Felipe
Pepsi MAX unveils images of some of the worlds biggest players as...
Read More