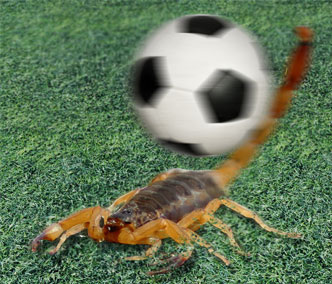 Rene Higuita’s spectacular ‘Scorpion Kick’ has been voted the best ever football trick in our poll.

The crazy Colombian keeper’s antics topped the list with 20% of the votes ahead of the Ronaldinho Flik Flak (19%) and Ronaldo’s Step Over (18%).

The poll we conducted here on Footy Boots had the following results:

The Higuita moment of magic occurred during the England v Columbia match at Wembley in September 1995 and was also included in Channel 4’s Top 100 Greatest Sporting Moments.

Footy Bootseditor Andy Kay said: “Our football boot forums have been full of debate around the best ever football trick for a while now, so we decided to conduct a survey to help try and settle the argument once and for all.””Readers voted on a list of illustrious and legendary tricksters including Cruyff, Ronaldo and Ronaldinho. The results were pretty close at the top with Rene Higuita’s Scorpion Kick just edging it. But we were all pretty surprised Lee Trundle edged out the World Cup-winning Diego Maradona.”

Written By
Felipe
More from Felipe
Real Madrid have been crowned La Liga Champions for the 31st time....
Read More