It seems that we can’t go a single Champions league round without another top player turning up for training in the as-yet unveiled adidas adiPower Predator!

Ever since spotting David Beckham in a new white-out version a few weeks back, it seems that many of adidas’ stars have now been supplied with this new all-white version for the adiPower to test.

The latest to receive what we can only assume is the ‘final’ version of the new adidas adiPower Predator is Manchester United’s Dimitar Berbatov.

Keen-minded football boots fans know that we spotted both the Bulgarian and team-mate Nani giving the adiPower a test run in training ahead of Manchester United’s last pair of Champions League games with Marseilles, but one photo in particular was well worth sharing with sharing with you!

As you can see, it looks like Berbatov’s adiPower football boots either have some sort of silver/light grey trim to them (or perhaps less glamorously, have just gotten muddy too many times!), making the the finer details of the adiPower somewhat easier to make out.

Here’s a list of what we think we can see on this version of the adiPower:

One surprise to us is the shape of the stitching on the toe-box of these unreleased football boots! Rather than being covered in stitching to hold the materials that make up the Predator element in place, the toe is marvellously simple – very reminiscent of the original adiPure! 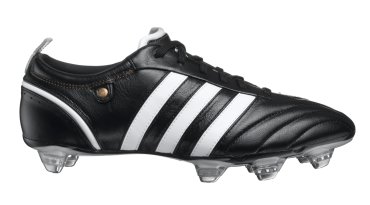 We reckon that this simplified front-end could lead to the adiPower Predator having a greater focus on comfort, control and touch, with the ‘Power’ part of the moniker coming from the PowerSpine and more focused Predator Element on the instep.

What do you think of the way the adiPower is shaping up?

Can you spot anything on Berba’s football boots that we might have missed?

Drop a message in the comments box and tell us!

Written By
Felipe
More from Felipe
He sinks his teeth into the topical football stories quicker than Drogba...
Read More