Nicklas Bendtner has put his famous pink football boots up for auction on eBay.

Bendtner was amongst a select few Nike endorsed footballers who wore the Mercurial Vapor Berry football boot when it was launched at the back end of last year. Unfortunately for the big Dane, it also coincided with an inconsistent run of form, which led to a number of pundits mocking Bendtner’s choice of footwear.

In fairness to Bendtner he didn’t make a big thing of the media attention has since got his head down and is performing well both for Arsenal and Denmark.

He is now using the notoriety of the pink football boots for good cause and is auctioning off a pair of match worn Vapor Berry football boots in aid of the Danish charity cycling team, Team Rynkeby, which supports a Danish fund for children with cancer. 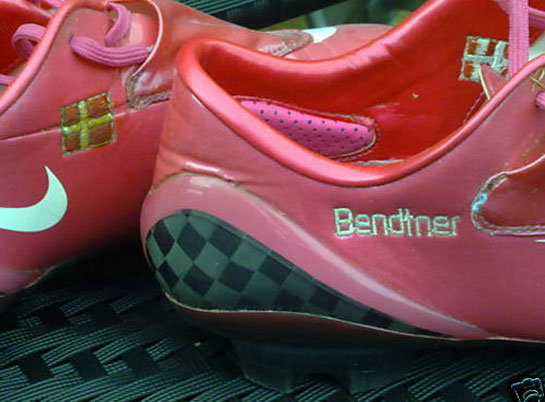 Bendtner wore the football boots when he scored in the Champions League match between Arsenal and Dynamo Kiev at the Emirates Stadium in London on November 25, 2008.

If you’d like to bid on the football boots you can do so here. The auction ends on Saturday 12th September 2009.

Written By
Felipe
More from Felipe
The first day of competitions in the FIFA Futsal World Cup introduced...
Read More