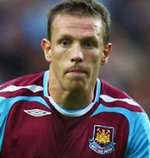 Craig Bellamy could be in trouble after an alleged row with a fan during West Ham’s 5 – 3 friendly win at Ipswich Town.

The Welsh international lasted just 24 minutes of the match before he was substituted after picking up an injury. As he walked along the touchline, Bellamy kicked an advertising hoarding and then appeared to get involved in a verbal exchange with an Ipswich supporter.

Bellamy, not well loved at Portman Road due to his links with arch rivals Norwich City, could now miss the start of the Premier League season and may even be a doubt for Wales who play Georgia in Swansea on 20th August.

A West Ham spokesman said: “We will look into the facts of what happened.”

And of immediate concern to Bellamy’s club and country will be how serious his injury is.

Bellamy played just nine games for the Hammers last term in an injury-ravaged first season at Upton Park which was blighted by abdominal and groin problems.

Written By
Felipe
More from Felipe
Robinson Bust Up The Footy Boots journo’s were on fire yesterday, suggesting...
Read More