The wait is almost over! Adidas have finally revealed official images of David Beckham in his new LA Galaxy Football Kit and Footy Boots brings you the latest images, featuring Beckham wearing his new Adidas Predator Absolute DB Swerve football boots! The new Adidas football shirts and kit have been redesigned, with a new team crest for LA Galaxy, as they become the new home for Brand Beckham. LA Galaxy will debut their new home jersey when they take on Chelsea on July 21st at The Home Depot Center on the campus of California State University – Dominguez Hills in Carson, California – tickets and flights are still available!

The latest in Adidas apparel technology is featured in the Galaxy kit including ClimaCoolTM and FlowMappingTM technologies, which allows heat and sweat to escape the body and is proven to reduce fatigue and dehydration. The jersey also features ForMotionTM technology, engineered to fit an athlete’s body in motion through 3-dimensional design and by flattening the seams to reduce irritation. 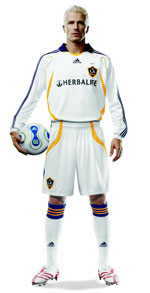 The official Adidas LA Galaxy replica home shirt is available in the UK from 16 July with a RRP of £40.

Written By
Felipe
More from Felipe
Lionel Messi could be back for Barcelona's Champions League tie versus Manchester...
Read More