Wow, the new adidas adiPower Predator isn’t even out yet, and there’s already another colourway on the block! We’re not sure whether this was an intentional move by adidas, but there was no way we were ever going to miss it on the feet of a certain Mr. Beckham! 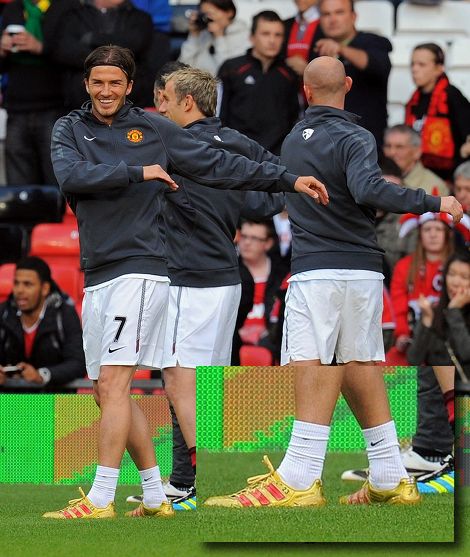 The former United captain and moustache-aficionado has called time on his Old Trafford career with a final match against the Turin club, and Beckham was granted special leave from duties with the LA Galaxy to participate.

It seems that adidas also had something special planned for Becks, who has played the last two weeks in his signature White/College Navy Predator_X, as they were clearly keen to have the former Galatico debut these new football boots. 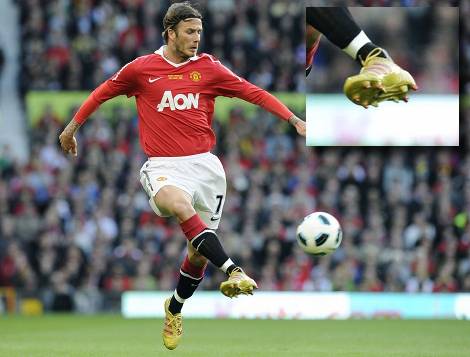 We at Footy-Boots.com have speculated whether Beckham would be receiving his own signature version of the new adidas adiPower Predator as he draws the the end of his illustrious career, but it seems adidas still have faith in ‘brand Beckham’ to sell football boots.

As you can barely make out on the heel of these gold/red adidas adiPower Predators, Beckham’s signature ‘free-kick’ logo rests just above the heel counter. Which, unless this is some serious bespoke customisation, marks these out as being Beckham’s signature Predator for this round of colourways.

This is far from the first time we’ve seen Beckham in gold Predators, so perhaps it’s no surprise to see that he’s opted for gold as his signature for the new adidas adiPower Predator.

As for technical details, as you can see from our pictures, Beckham opted for the new Hybrid SG configuration on his adidas adiPower Predator‘s complete with red SG studs.

You can also see that Beckham hasn’t had any sort of customisation added to the soleplate in this instance, sticking with the standard SprintFrame soleplate – marked out by the lateral stud and three distinctive ‘torsion’ bars under the arch of the foot.

Also, if you think that Beckham’s football boots look a little shinier than your average adidas adiPower Predator, then you’re absolutely right! Beckham’s signature model is made of a lightweight synthetic instead of Taurus leather, marking Beckham’s return to a synthetic Predator after spending his time in the Predator_X in the ‘standard’ upper.

Given Becks’ staunch love of the PowerPulse system from the Predator PowerSwerve, we’re keen to see whether Goldenballs (or now, Goldenboots!) sticks with the standard version of these great football boots, or has a custom pair made for him again. 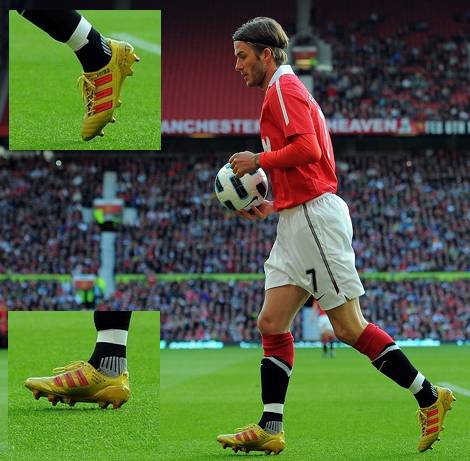 Either way, we’re thrilled to see Beckham in a signature Predator again!

We have no confirmed retail details from adidas on these at time of writing, though with the adidas adiPower Predator launch still nearly 2 months away, we could yet see them made available alongside the other two launch colourways.

Stay tuned to Footy-Boots.com for more info as it becomes available!