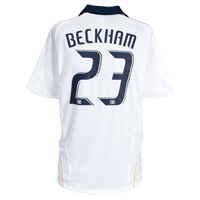 David Beckham will return to the LA Galaxy team, after AC Milan failed to agree a deal over a transfer.

AC Milan had a £5m bid for the 33-year-old English player rejected last week and under Major League Soccer rules, they had to agree a permanent move by Friday.

Beckham’s loan spell at the Serie A club proved successful after Beckham became a regular for Milan since his arrival in January. Now he faces a return to the US with his loan move ending on the 8th March.

Beckham made the loan move to assist him maintain a place in the England squad, as a result Beckham equalled Bobby Moore’s outfield appearance record against Spain in midweek. He hopes to extend his international career but will see the breakdown of this deal as a stumbling block as he will not be playing the same standard of football on a regular basis in the MLS.

Today’s deadline imposed by Major League Soccer Commissioner Don Garber regarding a resolution of David Beckham’s potential transfer to AC Milan has passed and we did not receive an acceptable offer for the player.

As a result, David remains an LA Galaxy player and we look forward to having him back with the club starting 9th March.

Written By
Felipe
More from Felipe
Another home defeat for second from bottom Fulham.
Read More