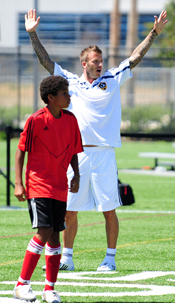 David Beckham has returned to LA Galaxy after a five month loan period at AC Milan. One of the first things he will need to confront will be teammate Landon Donovan, who’s comments have riled the normally placid Beckham.

For a book called ‘The Beckham Experiment’, Donovan commented on the way Beckham has applied himself since moving to LA Galaxy.

All that we care about at a minimum is that he committed himself to us. As time has gone on, that has not proven to be the case in many ways – on the field, off the field.

Maybe he’s not a leader, maybe he’s not a captain. Fair enough. But at a minimum, you should bust your ass every day. That hasn’t happened. And I don’t think that’s too much for us to expect. Especially when he’s brought all this on us.”

When David first came, I believed he was committed to what he was doing, he cared, he wanted to do well, he wanted the team and the league to do well.

Somewhere along the way – and in my mind it coincides with Ruud being let go – he just flipped a switch and said, ‘Uh-huh, I’m not doing it anymore’.

Beckham and the 27-year-old American striker will meet up on Monday during training. Beckham took the captain’s armband from Donovan immediately upon arriving in summer 2007 and Donovan deputises in Beckham’s absence. Another issue which gets to Donovan.

In 17 years, I have played with the biggest teams in the world and the biggest players and not once been criticised for my professionalism.

In every football player’s eyes throughout the world it would be unprofessional to speak out about a team-mate, especially in the press and not to your face.

But I’m going to turn it on a positive spin because that’s what this needs.

I’m personally very professional when I am on the field.

I don’t care what people say about me off the field, once I’m on the field I’m professional and if there is a chance for him to score, I will be giving him the ball.

Me and Landon will talk, but that will be a private conversation.

Donovan, who spent a spell on loan at Bayern Munich while Beckham was with AC Milan, played in LA Galaxy’s 1-0 victory over Chivas on Saturday. The two are likely to next play together against New York Red Bulls this coming Thursday.