Even for the non-committed, it doesn’t get much tastier than Barcelona v Chelsea in the Champions League, semi final, first leg.

While supporters of Manchester United and Arsenal will doubtless argue that the ‘really important game’ doesn’t take place until Wednesday, the clash between the Spanish and English giants represents all that is good about Europe’s premier club competition.

Many experts are predicting that the game could be all over after the initial match up. And judging by the way that Barcelona sauntered past Bayern Munich in the last round they could be right. Chelsea, of course, were magnificent against Liverpool at Anfield but nearly blew it at home in the return leg.

So, just what will be the deciding factor in tonight’s game. The Footy Boots view is that it’s very much how Barcelona’s forward line will profit against Chelsea’s re-jigged defence. 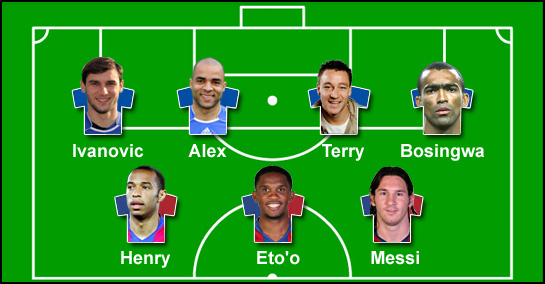 What superlatives haven’t already been used about Barca’s outrageously talented Argentinian international? The simple facts are that he’s the leading scorer in the CL this season with 8 goals from 9 matches.

Still with a soft spot for Arsenal, Thierry Henry will relish the chance of taking on one of their closest rivals. His sticky start at Barcelona is now but a distant memory and he is an integral part of the Catalan side.

Puma clad Samuel Eto’o completes the Barcelona spear head. He recently scored his 100th league goal for the club and has 30 this season. Is in Barcelona’s all-time top ten list of goalscorers.

The England captain was suspended for the second leg of the quarter final against Liverpool and was sorely missed. Knows all about the threat of Henry after some famous duels in the EPL. Will need to be at his obdurate best to blunt the rapier attacks of the home side.

Boy, can he hit them in his Nike footwear! It was Alex’s ferocious free kick that settled the nerves against Liverpool 2 weeks ago. With Carvalho suspended, Alex can expect a stern examination at the heart of the visitors defence.

Expected to move from right back to left back to cover the suspended Ashley Cole. Won’t have much to do tonight…..apart from mark Lionel Messi. So, no pressure then. His speed could just get him out of a few problems.

The unlikely hero from the Liverpool tie with 2 headed goals from the first leg. Unlikely to be given as much freedom in the Barcelona penalty box. That is, if he’s brave enough to venture over the half way line.