This weekend Barcelona finalised their shirt-sponsorship deal with the not-for-profit Qatar Foundation, based in the Middle East. However, not everyone agreed it was the right move for the club.

As previously reported when the deal was initially agreed last December, the deal totals at around £25m-per-season over a five-and-a-half season contract, and marks the first time anyone has paid to be the sponsor of the Catalan Club.

The not-for-profit Qatar Foundation is set up to back various philanthropic projects around the world, and it’s vastly-wealthy contributors will also see the foundation’s branding across the famous Camp nou stadium, too.

However, not everyone backs the move, with several individuals closely linked to FC Barcelona quick to decry the deal following it’s finalisation this past weekend at a Board meeting at the Camp Nou.

Former coach and playing legend Johan Cruyff slammed the deal as ‘vulgar’, whilst Joan Laporta – the club president from 2003 to 2010 who initiated the Unicef agreement that preceded the Qatar Foundation deal – refused to be present at the board meeting that voted on the deal.

“Our team looks like the Qatar national team now,” he told reporters in a damning statement, “They’ve sold the shirt for four cents.” Hardly that! Barcelona will reap €171 million over five years to carry the Qatar Foundation name on its shirt front and in its stadium.

Current President and former Nike executive Sandro Rosell was quick to defend the deal, saying it is a financial necessity.

“Are we living in the best moment in the history of the club?” Rosell asked the members and the media last weekend. “On a sporting level, without a doubt,” he answered his own question. “But I much prefer to think of it as an historic moment not only for sporting success, but for our values.

In a move to discredit Laporta’s comment, Rosell hit back by pointing out that much of the crippling €442m debt that has forced the club to take a sponsor was accrued in the incumbent President’s reign. 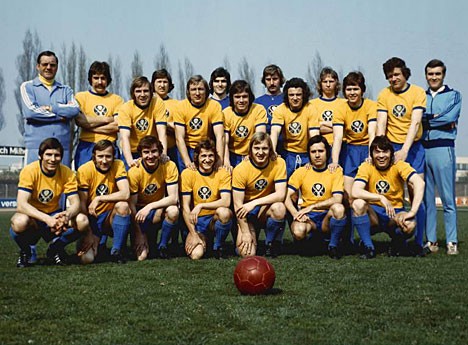 Barcelona can now boast the highest-paying shirt sponsorship deal in World Football, continuing a trend set in 1973 by Eintracht Braunschweig, which accepted payment to promote a German liquor company, Jägermeister, across the players’ chests.

What do you think of the deal? Who do you side with? Cruyff and Laporta or Rosell?

Written By
Ramsay
More from Ramsay
Want to know what happens when you mix a trainer with a...
Read More