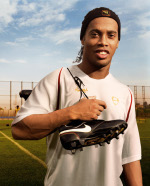 Ronaldinho could be on his way out of Barcelona.

The Brazilian international and former world player of the year has endured a troublesome season, starting less than half of Barcelona’s domestic, cup and European matches. His difficulties in Spain have seen him linked with AC and Inter Milan and also Manchester City.

And today, club President Joan Laporta said he believed it may be time for the player to leave the club.

“When you finish an era it’s normal that the leading figures should leave.”

Laporta said the club considered selling Ronaldinho in the summer of 2007 but decided not to after discussions with manager Frank Rijkaard and the player.

But Barcelona finished third in La Liga this season and were knocked out of the Champions League at the semi-final stage during a trophy less campaign.

Written By
Felipe
More from Felipe
Anyone noticed that the football season has finished? No, thought not. The...
Read More