Barcelona? Better without Messi? ‘Lunacy!’ We hear you cry, but according to our friends at Castrol’s Stats department, very true!

Castrol Performance data shows that in Lionel Messi˘ seven seasons in the UEFA Champions League, Barcelona have won 73% of their matches without him, compared to 51% when he˘ been on the pitch.

The adidas F50 adiZero wearer is uncertain for the clash against Rubin Kazan after suffering an injury during Barcelona˘ 2-1 victory against Atletico Madrid on 19th September.

The Argentine forward who has scored 27 goals in the UEFA Champions League – more than any other Barcelona player in history – has played a central role in Barcelona˘ recent national and international success.

However, the Catalan team have proved that they can achieve results without the 2009 Ballon d˘€žËOr, winning important European clashes in his absence. 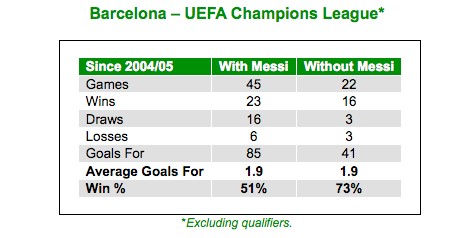 The 2-0 victory over Internazionale in November 2009 is the most recent example. His absence has not had an adverse effect on BarÄ‚§a˘ record in front of goal either, scoring an average of 1.9 goals per game whether Messi’s golden football boots are on or off the pitch.

To add a bit of Footy-Boots.com’s own anecdotal analysis to the mix, we reckon that this is because Messi is such a key player for Barcelona, he might get rested during less high-stakes ties and is more likely to play in the knock-out stages – which Barcelona are, of course, more likely to lose in.