Starting with FC Barcelona, who have unveiled their new 09/10 football kit made by Nike, with the design for the first choice strip reverting back to the traditional navy blue and claret vertical stripes whilst the second strip is a bright mango colour. 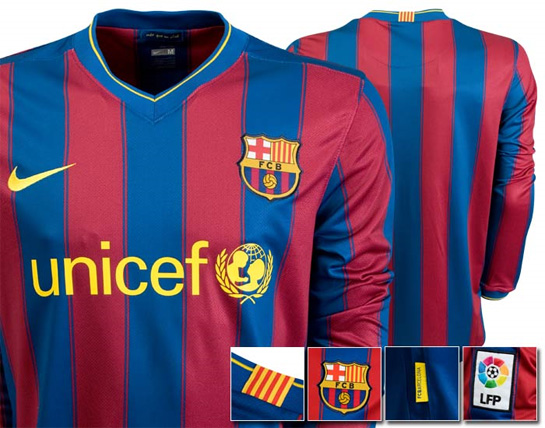 The first choice shirt recovers the traditional navy blue and claret vertical stripes but is now edged with a thin yellow line and has a V-neck and sleeve borders with a subtle black and yellow stripe. Appearing on the back of the neck is the Catalan flag, the Senyera.

A label is sewn on the inside of the neck with “M'©s que un club” (More than a club) and attached to the side stitching is another small label with the name of the club.

The official shorts are a classic navy blue with a claret stripe down the side and the Senyera is incorporated on the back of the waistband. The cords have the stripes of the Catalan flag and the socks have horizontal claret and blue stripes, a yellow edging and have the word “Bar'§a” stamped on the calf.

The new Barcelona away shirt 2009 10'  retains the details that distinguish the first choice kit however is coloured in a bright mango shade (evoking the Mediterranean Sea). 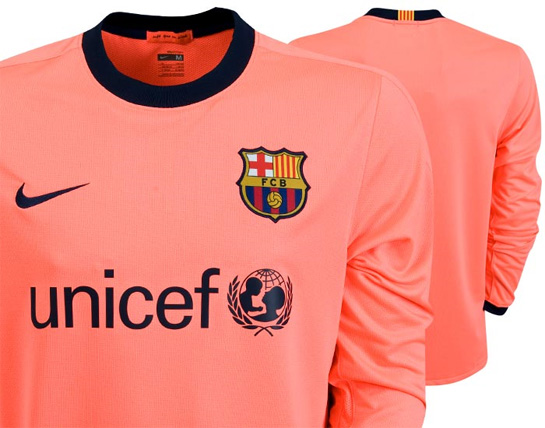 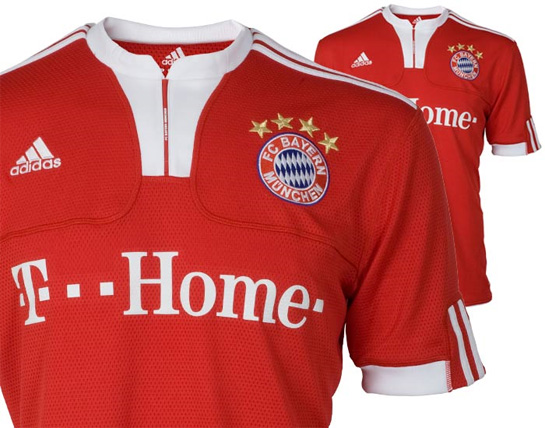 Since the year 1900, the striking jerseys worn by Bayern Munich have been the ultimate symbol of Germany’s most successful club, inextricably bound up with joyous celebrations, bitter dismay, stirring achievements and countless triumphs.

The latest chapter in Bayern’s story is to be associated with the new home shirt which features state-of-the-art fabrics, meticulously reproduced logos and decals, and the timeless Bayern combination of club red and white.

“The new shirt feels great,” revealed Bayern captain Mark van Bommel, “it’s light, comfortable to wear, the fabric is breathable, and the powerful red colour communicates the aggression with which we’ll go into Saturday’s meeting with VfB, and then right from the start of next season.”

In England, the new Aston Villa away 2009 10 shirt has also been revealed. 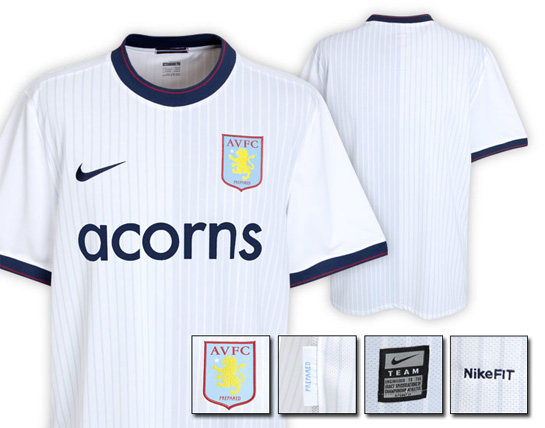 The new design honours the club’s significant contribution to the England national team and acts as a tribute to the 67 Villans who have represented the country.

From the first capped players in 1882 to other club legends like Peter Withe and Brian Little, Aston Villa have provided more England internationals than any other club.

Looking to the future, the latest sports apparel innovation and technology has been utilised by Nike to help the current crop of players take their game to the next level. The visual design of the kit is intended to reflect the personality and style of the current Villa team (which often fields nine English born players and currently has five regular England internationals) whilst respecting the history of the club.

New kit features include a ‘football white’ shirt with a ‘Villan red’ trim, ‘midnight navy’ shorts and white socks. ‘AVFC 1874’ is stitched into the back of the shorts while ‘AVFC’ is present on the front of socks and short drawcord tips.

The club’s mantra ‘Prepared’ is engineered into the side-seam of the shirts whilst also being present on the Villa crest. In addition, the kit is made from Nike Dri-Fit, an innovative technology that enhances the performances of players by keeping them drier, cooler and lighter. It achieves this by drawing sweat away from the body to the fabric’s surface for fast drying, while its three-dimensional construction allows for more air space around the skin to reduce clinging.

Leo Sandino-Taylor, Nike UK Head of Corporate Communications said: “Aston Villa has some exciting English players in their squad who could make a real contribution to international football in the next few years. Their current success with the National team has provided the perfect opportunity to pay tribute to the club’s England connections and create a technologically innovative kit that Villa fans and players will be proud to wear.”

For further football shirt news follow this link to FootballShirtCulture.com

Written By
Felipe
More from Felipe
23 men were killed in one of football’s worst tragedies ever, 50...
Read More