Michael Ballack has been spotted on the green, green fields of Austria training with Bayer Leverkusen in an previously unidentified pair of adidas football boots! 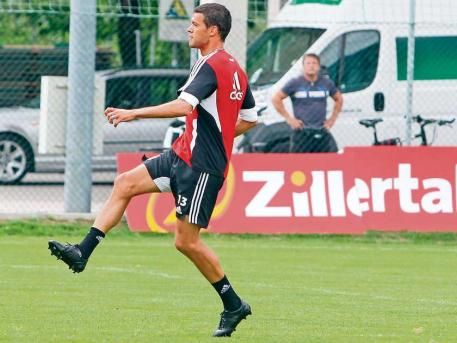 The legendary German midfielder has long been a football boots tester for adidas, having previously been spotted in just about every kind of Predator before it’s release since his time at Bayern Munich.

Now it seems that adidas have once again called on the former German National Team Captain to do some more testing, but this time for a new, mystery boot!

With Ballack being involved, the obvious choice is that these are a Predator, but we’re not sold on that idea – and neither are the guys on our Facebook page (who were the first to see these photos, by the way!).

Xavier S and Ali A both think that the instep would suggest that this is a control boot, with Steven McC also suggesting this could be an all-new line from adidas!

We’d be inclined to agree with them, as that pattern on the instep does look a lot like the control zones that we’ve seen on the Nike CTR360 and Umbro Geometra.

Our only hesitation would be that the boots are synthetic, which would be an unusual move for a Control boot – but Muyar K was keen to point out that these do say ‘Type 1″ on them, so they could just be a one-off prototype.

adidas have responded to inquiry on these football boots, with PR boss Oliver Braggen telling German paper BILD: “As a partner of adidas Michael Ballack tested on our latest shoes. The feedback is critical to our product development. This model comes onto the market in May 2012 and will certainly also be trialled by national team players.”

The date of May 2012 is certainly very interesting, with the adiPure 11pro currently with Schweinsteiger, Messi testing the adiZero II back in March and now Ballack in new football boots, it seems that every possibility has been accounted for except that these are either a new Predator or a whole new range – and given that the adiPower only released at some retail stores in July, it would be a pretty bad show from adidas to have a new Predator out less than 10 months later!

Whatever these mystery adidas football boots turn out to be, expect them to get some heavy exposure next season; a release of May 2012 puts them right in the spotlight ahead of the 2012 European Championships!

What do you think they could be?

Written By
Kyle Elliot
More from Kyle Elliot
adidas use a super slow-motion camera to capture the emotions of fans...
Read More