As the national team kick-off their preparations for South Africa 2010 with a testing friendly against five-time world champions Brazil, fans can continue to play a key role in helping to bring World Cup football to England in 2018.'

Significant global backing has already been secured as fans from 140 countries around the world have pledged their support to the England 2018 FIFA World Cup Bid via the official website, Facebook pages and text message service.'  England 2018 supporters have also been pictured all over the world with Back the Bid scarves from Mt Everest to the Rocky Mountains, Hong Kong to Sydney and Rome to Dar es Salaam.

There are a variety of ways supporters can Back the Bid including texting ‘ENGLAND’ to 62018, logging onto the official website www.england2018bid.com, joining the official Facebook site www.facebook.com/england2018 or by following the bid on Twitter www.twitter.com/england2018bid.'  Fans recently provided another dramatic illustration of their desire for World Cup football in England when a giant ‘Back the Bid’ message involving 25,000 supporters was unveiled at the Belarus fixture at Wembley. 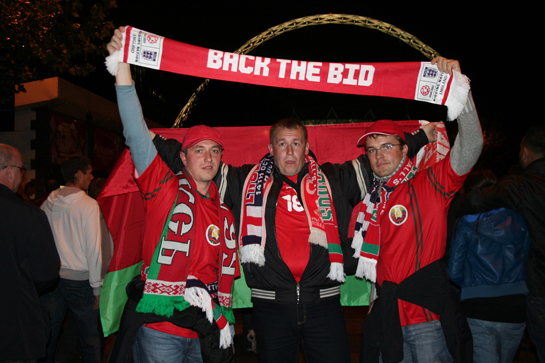 The passionate support for English football is one of our greatest assets and I’ve no doubt people will show how much they want a World Cup in England by texting ENGLAND to 62018 and getting their friends and family to do the same.'  Support from fans could really make a difference and help us win the bid so I hope they join me in Backing England 2018.

Supporters will also be able to select their favourite Host City by texting the name of that city to the 62018 number (users will be charged at their standard network rate for all text messages). In addition, a special England 2018 iPhone application and widget are available ensure fans keep fully up-to-date with the latest news, video and imagery at the touch of a button.

Written By
Felipe
More from Felipe
Arsene Wenger has branded his team absolutely amazing, despite finishing the season...
Read More