Okay, okay – strictly this is rugby territory – but the Asics Testimonials are football boots as much as they are rugby, so we definitely thought some of you guys would be interested! 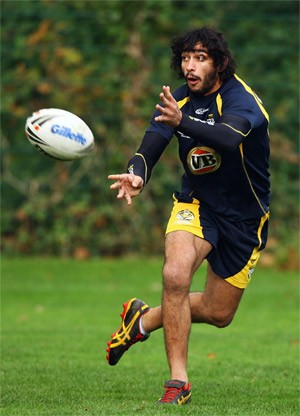 Dubbed the Asics Lethal Testimonial Indigenous, these classic looking boots are currently making waves in Australia as they have finally become available to the public.

Originally a custom-colourway request from Aussie Half-back Johnathon Thurston back in 2009, Thurston asked Asics if they’d make him some boots to honour the flag of Australia’s Aboriginal tribes.

“I always get asked about it from the indigenous kids, they always ask me where they can get a pair. Asics were doing a boot and I asked them if I could get the Aboriginal colours and I got them.”

The colourscheme is derived form the 3 colours of the flag; Black (for the people), Red (from the Earth) and the Yellow Sun.

Now, after over a year of them being strictly player issue (and charity competition prizes) Asics have finally seen it fit to make them available to buy in the shops.

But here’s the kicker, the are going to be a strict Limited Edition. Available to Pre-Order now, the Asics Lethal Testimonial Indigenous will be released officially one week tomorrow; August 3rd 2010.

Features of the boot include a lightweight construction, complimented by a full Kangaroo (What else!?) Leather Upper – with the signature Testimonial flip-down tongue.

Priced the same as usual Testimonials, these Asics Lethal Testimonial Indigenous will set you back a reasonable £79.99

We definitely like this model, especially the Yellow Asics Stripes and the Racecar Red Soleplate!

ASICS UNVEIL ABORIGINAL FLAG BOOTS, 8.4 out of 10 based on 27 ratings https://www.footy-boots.com/wp-content/uploads/2010/07/ASICS-UNVEIL-ABORIGINAL-FLAG-BOOTS.jpg