Asics are a brand that have been relatively overshadowed in recent years, despite making some of the highest quality footwear on the running and athletics market.

Still, some football players are dedicated to their brand, such as Inter Milan’s David Suazo (not to mention several others in Serie A) who have stuck with the Japanese brand over the past few seasons.

Their most recent creation is this – the Asics Lethal DS IT 3, shown here in White/Red/Black.

Asics say that this range of football boots is based around two very contrasting pillars of design, weight-reduction and player comfort. 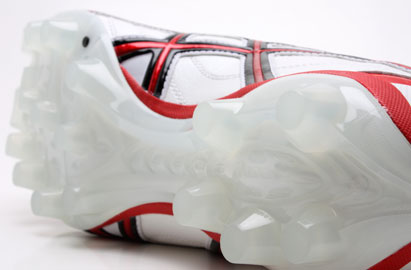 Whilst used in running shoes to enhance the strength through the middle of the foot, Asics have used it here to create the outsole under the heel of the boot, resulting in a drop in weight over previous models.

The SoLyte polymer also has the advantage of having more of a spring than the usual TPU you’d see in many outsoles. Asics claim that this added ‘spring’ in the step makes the Asics Lethal DS IT 3 one of the most comfortable on the market, based on the added support and compression of this section of the boot. 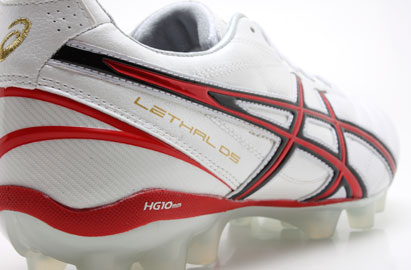 Another factor in the Asics Lethal DS IT 3‘s exceptional comfort is that the the heel is raised by around 10mm in comparison to traditional football boots. Which is an interesting statement, as many football boots on the market, not least the adidas F50 adiZero, pride themselves on having a wide, flat ‘footbed’.

Asics say that this raised heel, however, is the single best biomechanical poisition for the foot when playing sport, as it reduces the strain on the achilles tendon, calves and lower back muscles – which always sounds like a good thing to us!

As for the more traditional aspects of these football boots, they feature a super-soft Synthetic Leather upper, PolyUrethane Heel counter, and central lacing system for a tight fit across the forefoot – definitely all aspects of a classic boot.

The Asics Lethal DS IT 3 were only launched this month, but are already proving to be a big seller – and we have a feeling that this is do with the pricetag!

With an RRP of £80, the Asics Lethal DS IT 3 isn’t cheap – but it’s definitely got the edge over some of it’s competitors!

In fact, the only top-end football boots that offer such a competitive price tag are the Umbro GT Pro!

So, have you tried a pair of these sharp-looking football boots out? If so, what did you think?

Written By
Kyle Elliot
More from Kyle Elliot
Nike announce the future of Kangaroo leather in production of their football...
Read More