In a month that’s seen speed football boots unveiled from the big guns in the form of the Nike Superfly III and adiPure SL, it’s great to see that there’s something new and lightweight from one of the more niche brands out there too – in the form of the Asics DS Lyte SK!

Seen here in a dramatically styled upper, you’ll notice that Asics DS Lite SK follows many of the traditional Asics styling cues from the DS range – including the branding, heel counter and general shape that has seen it become a cult classic on the continent and Asia.

So, how does this version differ from the Asics DS football boots we’ve been seeing for the past two seasons? Well, as you might have guessed from the name; it’s lighter!

And at 224g it’s pretty light indeed! Whilst not troubling the adiZero Prime and Puma v1.10SL in the sub-200g category, the Asics DS Light SK is definitely a viable alternative to football boots like the Mercurial Vapor VII, Umbro GT Pro and Mizuno Supersonic Wave. 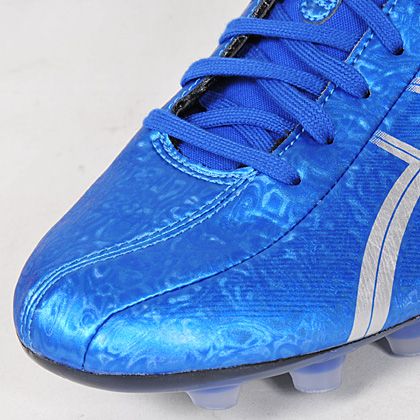 The real selling point, however, is the technology that Asics have crammed into the Asics DS Light SK whilst still keeping the weight low.

Starting with the upper, Asics have gone to the same synthetic leather specialists that Nike use, Teijin, to create an all-new synthetic upper for the traditionally leather DS last.

Dubbed ‘Ex-Skin’ Asics have aimed to not only reduce weight on the Asics DS Light SK, but to use the unique properties that a synthetic offers them rather than trying to mimic a leather exactly. 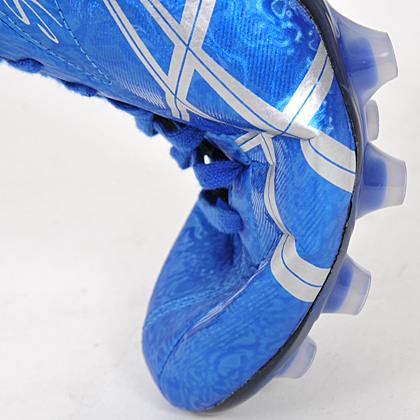 As some of the pictures show, the Ex-Skin offers a fabric-like level of flexibility to the upper of the Asics DS Light SK, which would leave us guessing that these are a seriously comfortable pair of boots to play in.

Asics’ motto is “anima sana in corpore sano”, which translates to “Healthy Soul in a Healthy Body”; which is exactly why Asics seem to have spent so much time and effort trying to make the Asics DS Light SK the most comfortable fitting football boots around.

The Asics DS Light SK sees the return of the 10mm raised heel section, for a bio-mechanically correct starting position for the foot; and also a new ‘Arch Fitting’ section on the instep, the supports the arch and instep for improved comfort and ball feel when passing.

The sole also sees the evolution of the SoLyte polymer that premered on the Asics Lethal Tigreor DS3, triple-layered at 3 different consistencies (like the heel counter on the Mizuno Wave Ignitus) to offer rigidity, durability and flexibility in varying levels depending on where the foot it’s needed.

As with many Asics football boots, the Asics DS Light SK is available in China, Japan, Australia, New Zealand and Korea right now, but this hypnotic metallic Blue colourway won’t be available until May 2011.

What do you think of the Asics DS Light SK?

Let us know in the comments field below!

Written By
Kyle Elliot
More from Kyle Elliot
Has 2012 been a vintage year for football boots? We look back...
Read More