With just days to go until the new season, we might have our very first look at one of the new boots set to make a splash later on in the 2013-14 campaign, courtesy of some of Arsenal’s Puma-wearing stars.

Since Friday, two of the Gunner’s PowerCat-wearing stars, Emmanuel Frimpong and Bacary Sagna, have both turned out to training in an all-new football boot, which we presume is from the Big Cat.

A full black-out, we can’t make out much in the way of details on these mystery prototypes – but with some careful scrutiny (and a dash of wild speculation) there are a few notable features on these to-be-released boots.

The upper looks to be either a very high-gloss finish leather or – more likely – a performance synthetic. Puma have made no secret over their desire to use less K-Leather in production of their football boots, so bringing their PowerCat – currently the only kangaroo leather boot in their line-up – over to a synthetic construction would certainly be in line with that. 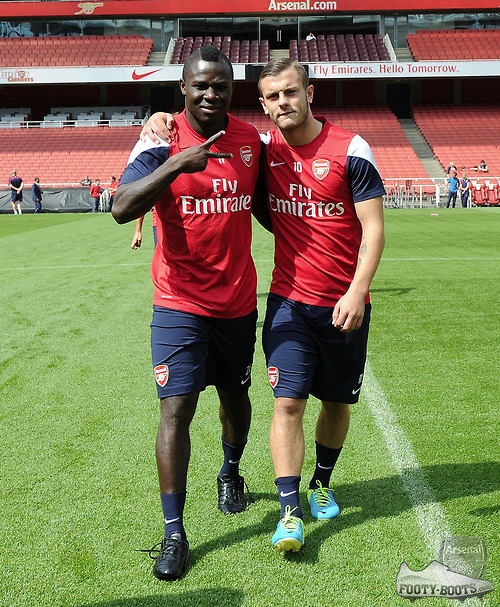 There also seems to be some sort of element that envelopes the entire instep in play on this new boot, along with side-offset lacing and a traditional tongue.

As evidenced on Sagna’s prototypes, it also seems as though Puma are at least considering the idea of using conical studs on this new model; given the amount of Puma stars who opt for a custom conical plate on their boots, Puma could well be taking all that athlete feedback on board and offering the same thing to consumers.

However, Puma’s rebranding of the v1-series show they’re not afraid to make changes to bring a unified message across all their ranges, meaning evoPOWER or PowerCell wouldn’t look out of place, either.

Have we missed anything? Let us know in the comments if you can see a feature we didn’t mention!