Tonight sees two of Europe’s most fluid, attacking teams go head to head in the Champions League – truly a clash to make the mouth water for fans – but how do the players feel about it? We caught up with Kieran Gibbs and Nicklas Bendter following the conclusion of Nike’s ‘The Chance’ to find out! 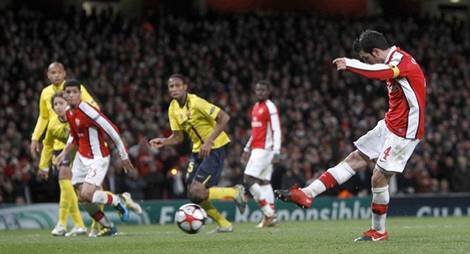 Any team who goes up against Barcelona are going to be an underdog, but as they proved in a captivating 2-2 draw at the Emirates last season, Arsenal are a team more than capable of biting back.

But the away leg at Camp Nou was an entirely different matter; despite taking an early lead through Nicklas Bendtner, Lionel Messi rose to the occasion and systematically took Arsenal apart with lightning pace, clever runs and deft finishing. Oh, and 4 goals.

How does the big Danish striker remember his goal away at Barcelona?

“It was okay” says Bendtner, sounding genuinely underwhelmed “quite a difficult goal – it could have been a lot easier. But after that it sort of went down – you know what happened”

It’s all too clear that the wounds of a 4-1 away loss still sting throughout a team more commonly known scoring 4 goals in games, not conceding 4.

Kieran Gibbs, who will likely be superseded by the more experienced Gael Clichy on the night is far more optimistic.

“There were injuries last year that we’ve not got this year, so that gives us a chance. It’s only gonna help” – and he’s not wrong. Arsenal made the trip to Spain last year without Cesc Fabregas and Robin van Persie, two players who have been vastly influential for the Gunners this term, along with an in-form Samir Nasri – who is recovering from an injury just in time to face the Catalan’s most famous club. 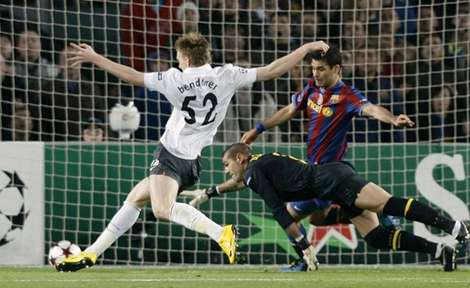 Bendtner bags against Barca at Camp Nou: “It was okay”, said the striker.

Will there be any tactics deployed by Arsene Wenger on the night? “Not to be afraid” offers Gibbs, “I just think we need to concentrate on our own game. They are one of the best teams in the world, and we can’t take that away from them – we just have to do what we do best”

“It’s going to be a tough game”, agrees Bendtner “but I do think we’ve got as bigger chance to win as they have.”

Despite the talk of revenge, retribution and the daunting prospect of facing not only Messi, but World Cup winner David Villa too – Are the Arsenal squad up for it?

“Majorly! I think that’s the game players want to be involved in” nods Bendtner, smiling, “Probably the biggest you can play.”

How do you rate Arsenal’s chances tonight? Will Barca prove too much? Or will a reinvigorated Arsenal side cause a famous upset?

Written By
Kyle Elliot
More from Kyle Elliot
Under Armour kit out the comfort-maxing Clutchfit Force football boots with a...
Read More