Whilst speculation was rife yesterday over the who will make The Gunners’ kits over the next few years, the focus is brought back firmly on the present today as Nike reveal the Arsenal Away Shirt 2012 / 13. 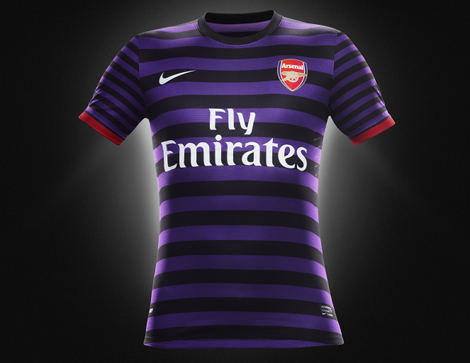 Nike have kitted out the North London club in an adventurous new away kit this season. Its eye-catching design marks a new direction for Arsenal, combining a rich purple base with black hoops.

Taking visual inspiration from high street fashion, the Arsenal Away Shirt 2012 / 13 is on-trend and by using such a regal colour in the year of the Diamond Jubilee celebrations, it also honours the Club’s historical royal links. 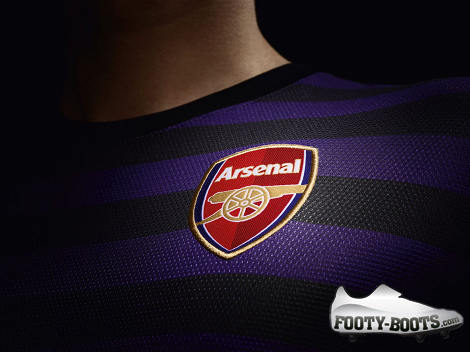 The Gunners were known as “Royal Arsenal” in the 1890s having been formed at the Arsenal munitions factory in Woolwich, South London. Originally bearing the name “Dial Square” after one of the factory’s workshops, the founding fathers decided to merge the name of a pub they met in – Royal Oak – with their place of work.

The red trim on the Arsenal Away Shirt 2012 / 13 cuffs compliment the purple body and pay homage to the home kits that are so identifiable with the Club, whilst the differing hoop patterns on the body and the sleeves of the shirt give it a modern twist. 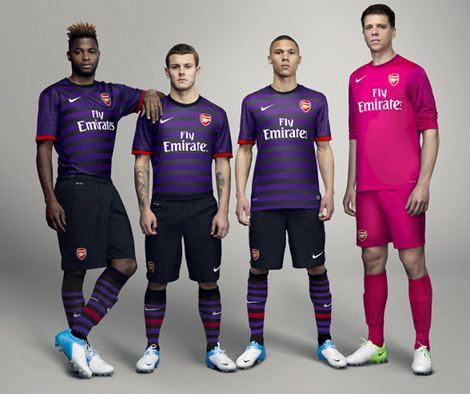 The purple and black hooped socks, bearing one red hoop each, again pay tribute to Chapman’s legacy, as it was he who introduced hooped socks – he reasoned that they would make it easier for his players to pick one another out on the pitch. 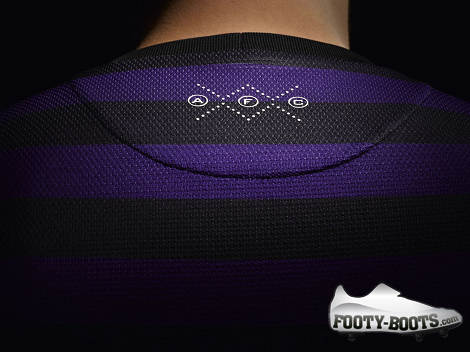 Whilst the kit combines modern sport and youth style to give the club a striking new look, Nike’s innovations give the team the most technologically advanced kit to aid athlete comfort and performance.

The new home kit is made from Nike’s ground-breaking recycled polyester, making it Nike’s most environmentally friendly kit ever produced. Each kit (shirt and shorts) is made using up to thirteen recycled plastic water bottles and this innovative manufacturing process reduces energy consumption by up to 30% compared to manufacturing traditional polyester. 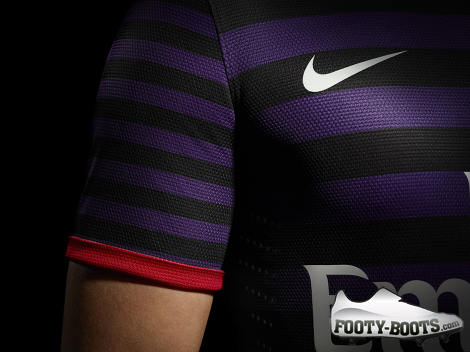 The kits are made out of 23% lighter fabric with 20% stronger knit structure than Nike’s previous kits and feature Nike Dri-FIT technology to wick moisture away from athletes to help keep them cool and dry on-pitch.

Available to pre-order from today for a 9th August 2012 launch, the Arsenal Away Shirt 2012 / 13 is set to retail for £45 for an Adults Short Sleeve version.

A kit that’s bound to get people talking, give us your thoughts on the Arsenal change kit in the comments, below!

Thanks to Dani for posting this up on our Facebook page!