Andriy Shevchenko scored two and made one assist to fire Chelsea into the Carling Cup final. 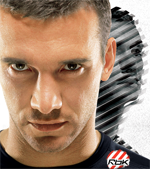 Shevchenko, netted in the 22nd and 43rd minutes in the second leg of the semifinal at Stamford Bridge, following the 1-1 draw at League Two club Wycombe. He then went on to set up Lampard in the 69th, with the England midfielder scoring his second goal in the 90th.

Substituted in the 84th minute, Shevchenko received a huge ovation from the crowd and shook hands with Mourinho, who was clearly impressed by the player’s performance.

Chelsea now face the winner of the Tottenham – Arsenal semi final. The final will be played on February 25th at the Millennium Stadium in Cardiff, Wales.

He ended his contract with Mizuno in the summer and switched to wear the Reebok football boot.