It appears Spanish midfielder Andres Iniesta was left an extra-special present from Nike under his tree this year as' the World Cup-winner returned after La Liga’s winter break to train in an all-new Nike Magista prototype.

World Cup winner Iniesta trained on January 2nd ahead of Barcelona’s 4-0 drubbing of El Che in a blacked-out pair of boots that are sure to get boot-spotters attention. 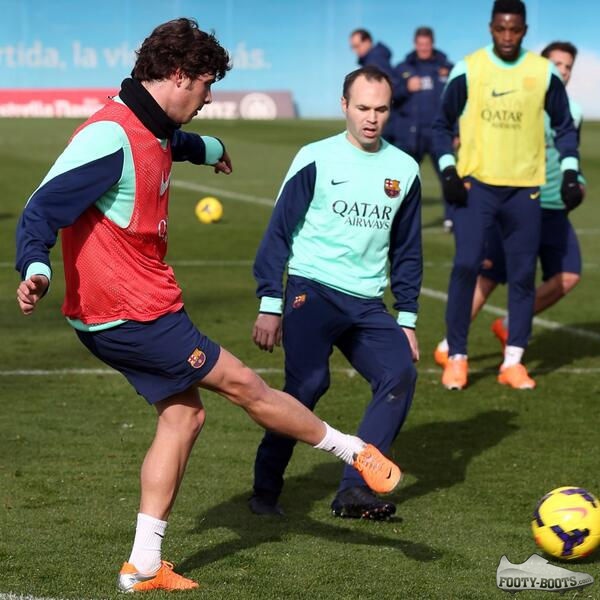 As the face of the CTR360, Iniesta is most certainly training in a Nike boot, however an interesting caveat is that the midfielder is likely be breaking in a new silo for the Swoosh.

In October 2013, Nike filed a patent for the name ‘Magista‘ that reads as follows:

On Wednesday, October 16, 2013, a U.S. federal trademark registration was filed for MAGISTA by Nike, Inc., Beaverton, OR 97005. The USPTO has given the MAGISTA trademark serial number of 86092692… For Clothing, Footwear…Leather Goods…Bags, namely, all purpose sports bags, tote bags,

Hot on the heels of the Tiempo Legend V and Nike Hypervenom, renaming the CTR360 to something new will leave Nike with a fresh-looking line-up going into the World Cup this summer.

But will a re-name mean a change in performance focus for one of Nike’s best-loved football boots?

It seems unlikely – the CTR360 is a hugely popular football boot with professionals and casual players alike.

Sneaky leaked images of the boot suggest an all-over approach to control with an element that spans the forefoot in an interesting way. It also verifies the rounded integrated heel counter and Hypervenom-esque rounded studs we can see here on Iniesta’s black-out model.

Certainly an exciting-looking new prototype, the Magista kicks off what is sure to be an incredible new year for new football boots with the biggest party in soccer landing at the end of the season.

No, not the Europa League final, smart guy.

Thanks to DDChile for sending in the spot, images Screengrabbed via the BarcaTV player.

Written By
Kyle Elliot
More from Kyle Elliot
Becks is Back with this stunning new Lethal Zones Predators - but...
Read More