Footy-Boots.com had the chance to head on down to NikeTown last week as the American brand ready their new Nike T90 Seitiro football for the 2011-12 season.

Whilst there, we caught up with Arsenal’s Alex Song to see what he thought of the new ball, Arsenal’s pre-season, Gervinho and'  – of course – football boots! 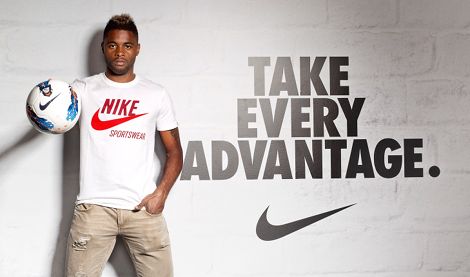 Footy-Boots: We’re here for the launch of the new Premier League Ball – the Nike T90 Seitiro, how important is a technically advanced ball like this to your game at the top level?

Alex Song: We have a lot of technology in the game at the moment, and using it properly in a ball like this is important – it lets you do everything you want to do.

When you’re playing a long ball, it has to go where you want it, you have to be able to see it properly so you can control it – it can make that much difference.

FB: Nike’s ads are saying this is the ‘World’s Best Ball’ – would you agree with that?

AS: I think it’s THE best ball, of course! I think for the last 2-3 seasons, it’s been the best, too. This season and last season, especially; we train with it and play games with it all the time, and it’s always great.

I trained with this ball earlier today and you don’t get any of those problems with the spin or anything. I think it’s good for the future, too because you need to have a good ball to help players develop to their potential. 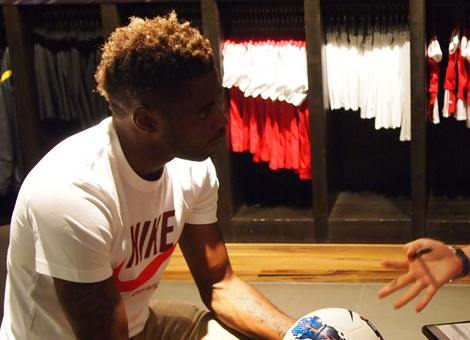 AS: The CTR is my boot – The first time I put the CTR on, I said ‘this is perfect!’. It’s different, as soon as you feel it, you can tell. When I wear the CTR – it’s perfect!

FB: What makes the CTR the perfect football boots for your position?

AS: I think it’s very good, I wear the CTR and as a midfielder all the passing and control, even when you’re in a bad position, it just seems easier. You can do just what you need to do!

I think they’re best from Nike at the moment! If you want to pass, you can pass, if you want to work on control, they help you there too. 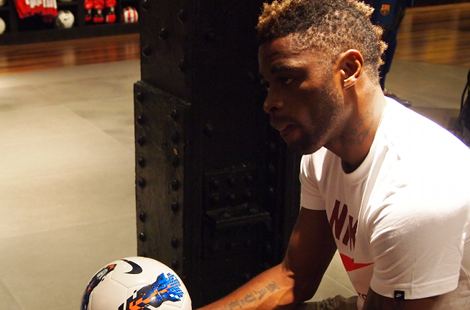 FB: You’ve just got back from a pre-season tour of Malaysia – Theo Walcott said you were treated like rock stars! Did you enjoy the tour as much as he did?

AS: It was a nice surprise for me to go to Malaysia and China with the rest of the team and I had a lot of fun. We saw a lot of people on our tour, and it was a great opportunity to meet lots of fans and make them happy. There were so many Arsenal fans out there who we were able to make very happy – but to make them very happy we need to win something.

It’s been too long, for them and for us – which is why we need to win them something.

FB: Someone who didn’t arrive in time for the tour was Gervinho – how’s he settling in since bagging two against FC Kolne?

We saw when Gervinho started to play pre-season games with us that he started to bring something special to the team.

The most important time for him is the next two weeks (ahead of the season) because we already know he’s a great player from the French league and the Ivory Coast national team. 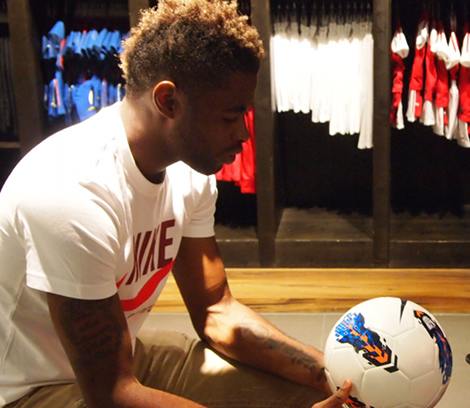 FB: Arsenal haven’t had a big-spending summer like Liverpool or Manchester City, but are still expected to be amongst the contenders for the title. What keeps Arsenal competitive, without splashing all that cash?

AS: Arsenal have a different quality too, because we give young players a chance to play. Look at Jack [Wilshire]. If he was in another team, I don’t think he would have been given that chance to play like he has here – and that’s very good for him and us.

The important thing is getting back together as a team and trying to lift something.

FB: People see Arsene Wenger as ‘The Professor’ – what’s he really like on the training pitch with the players?

AS: Everyone comes to Arsene, the whole team – young and old.

He’s like the father of the team, we have the opportunity to have not only one of the best managers in the world, but also a great man. He wants to give you the best, so you can be the best player in the world – and you can feel that when you’re playing on the pitch.

That’s why we’re all happy to have him at training with us, we’re all very grateful for what he does for Arsenal.

The Nike Total 90 Seitiro is the new official ball for the Premier League season 2011-12; tested, developed and used by the best players in the world, for the best league in the world. ' Visit www.nikestore.com/football

Written By
Kyle Elliot
More from Kyle Elliot
Puma and BVB go all out for the launch of the new...
Read More