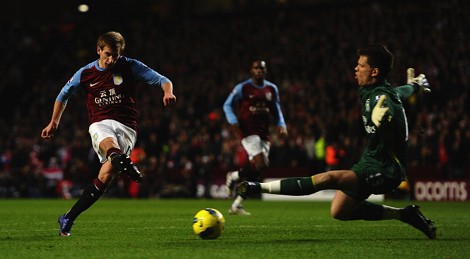 The England Under-21’s international capitalised on a mix-up between Arsenal’s centre-backs to roll the ball off his new Loyal Blue Nike CTR360 II and past Wojciech Szczesney in the 54th minute to score the landmark goal.

Speaking of writing his name into the record books, Albrighton told Footy-Boots.com;

Ĺ›It was great to score the 20,000th goal last night. Starting my career a couple of years ago, I would never have thought I would be the one to net such a landmark goal. I remember when Les Ferdinand scored the 10,000th and to score the 20,000th, in front of our own fans is something I will remember and be reminded of for the rest of my life.ĹĄ

The goal from the Villa youngster brings football boots manufacturer Nike full circle in their journey to the top of the world of footballing brands, as Sheffield United’s Brian Deane was also wearing Nike boots when he scored the Premier League’s first ever goal way back in 1992.

Albrighton was rewarded with £20,000 from Premier League sponsor Barclays – which he chose to donate to Acorn’s Children’s Hospice, a Charity that have often worked with Aston Villa Footbal Club in the past.

Written By
Kyle Elliot
More from Kyle Elliot
We take a stat-tacular look at Arsenal's Thomas Vermaelen ahead of their...
Read More