Having steered their way through the tough tasks of defeating Derby and Tottenham, during this past week, Manchester United find themselves in the Carling Cup final and the 5th round of the FA Cup. Whilst the quadruple remains possible on the pitch, off the field United have been active in the football shirt industry.' 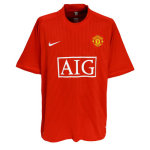 As we predicted a while back, the insurance company AIG has officially confirmed it will not be renewing its shirt sponsorship of the club when the deal expires. The American company also said in a statement that it was “in active discussions” with United regarding the current contract which ends in May 2010. Speaking on the matter, a United spokesperson stated:

The club is in dialogue with a select number of top companies worldwide and has so far received sufficient interest to be confident it can improve on its current £19m annual partnership with AIG.

Meanwhile, Sahara India’s head of Corporate Communications Abhijit Sarkar confirmed that the business group has received a sponsorship proposal from the Old Trafford outfit. The Sahara India pariwar logo and name is a common sight amongst national cricket team shirts, though if this deal goes ahead with United, it will be the company’s first sponsorship agreement involving a football club. 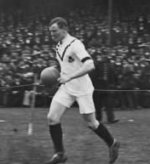 Further news featuring United includes the revelation that the players will be playing in a remake of the historic 1909 kit during next season. The United players will wear home shirts, which feature a large white V-shape sash down the front. The kit is based upon a 100-year-old design supplied by one of the club’s own players, Billy Meredith, before the 1909 FA Cup Final. United’s kit manufacturer Nike have been asked to rework Meredith’s shirt – using high-tech materials rather than heavyweight cotton and with a white sash on a red shirt instead of 1909’s red-on-white.

The club felt bringing back this old kit was the perfect way for United to mark 100 years of success.

By James Bailey of footballshirtculture.com

Written By
Felipe
More from Felipe
South Africa give their home support something to shout about with victory...
Read More