Argentina & Man City' star Sergio Aguero was spotted training in adidas adiPure IV football boots whilst on duty with the national team, shunning his deal with Nike. Before his big switch to the Puma brand. 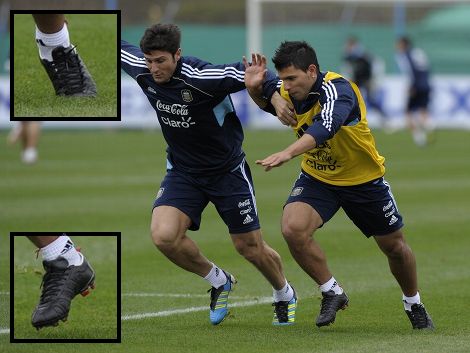 Whilst the pacey forward has been the subject of plenty of speculation over which club’s shirt he’ll be wearing next year (he went to Man City of course), no-one could have guessed that we should also have been speculating over his football boots too!

As the Argentina squad prepare for the Copa America, Aguero made a switch from his Superfly III’s (which he’d used in training the day before) to a blacked-out pair of the adidas adiPure IV.

Aguero has often been a tricky customer to pin down when it comes to football boots; despite appearing in several ad campaigns for the CTR360, wearing the Tiempo for most of 2006-2008 and dabbled in the T90 silo during the ‘Supremacy’ era – ‘Kun’ has recently had a soft spot for the Vapor series, often wearing the Superfly III in big games, such as the Madrid Derby.

Despite his tendency to switch silos as often as his name is in the ‘Transfer Gossip’ column, Aguero has been a Nike man through-and-through since joining Atletico in 2006, making his appearance in some adidas football boots a real novelty. 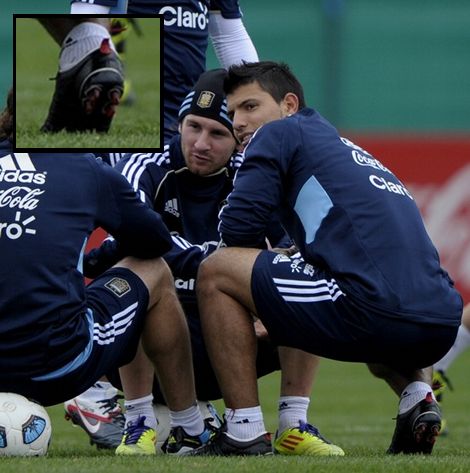 “Is that a Nike rep over there?” – Sergio keeps one eye over his shoulder!

Given the Argentina National Team’s connections with adidas there is always the chance that Aguero is wearing these football boots as they happened to be in the changing rooms, following something untoward happening to his Superfly III‘s.

But given the time of year (player’s boot sponsorships are often negotiated over the summer or at the end of the calendar year) there’s a very good chance the alleged Real Madrid target is trialling alternative boots ahead of deciding whether to put pen-to-paper on another deal.

Aguero was a long time Tiempo advocate, so trying out the adiPure IVs would definitely fit his tastes – though we imagine that the thought of playing in the new Nike Tiempo Legend IV (which combines his beloved Tiempo and Superfly) could swing him back in the direction of the American brand!

Written By
Kyle Elliot
More from Kyle Elliot
FIFA will decide at a debate in March whether to ban Snoods...
Read More