Normally we don’t talk too much about the ‘other’ football here on Footy-Boots.com, but given the sheer amount of cool stuff that’s been emerging from the gridiron recently ' it was only a matter of time before we saw something on the footwear we just had to feature!

In this case, it’s the adidas adiZero Smoke (the American Football' equivalent' of the F50)’s incredible ‘Spotlight’ colourway. 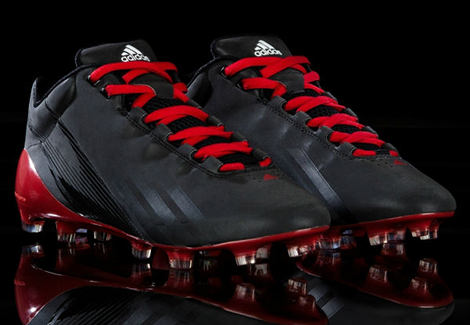 What makes it so special? In normal conditions, the cleat is a lethal-looking matte black finish, with subtle adidas graphics running through the upper in contrast to the bright red SprintFrame chassis.

However, when in the bright light of a camera-flash or a stadium floodlight, the upper changes colour into a almost-luminous white colour! So when a player is ducking and weaving for a spectacular return, or is picked out by the quarter-back in the endzone, and cameras are flashing all round the the stadium, the ‘Spotlight’ technology lights up the player’s feet. 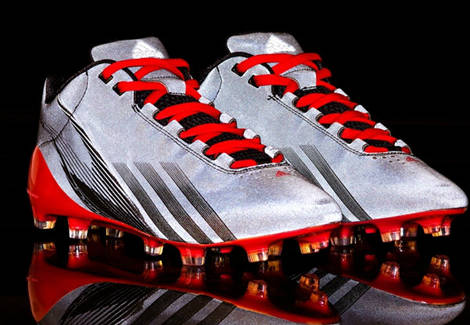 Debuted in adidas Unrivaled Game between the Wisconsin Badgers and Nebraska Cornhuskers,' Spotlight technology works by coating the upper in tiny beads that reflect intense light, but are completely invisible under normal conditions – so we’d have to guess that they won’t have too much of a negative effect on the comfort or feel of the boot.

With Spotlight technology tried and tested in the field, could we see it brought onto football boots before too long? We certainly hope so! Whilst we’re all for bright colours, technology like this could prove to be a breakthrough for boot aesthetics. 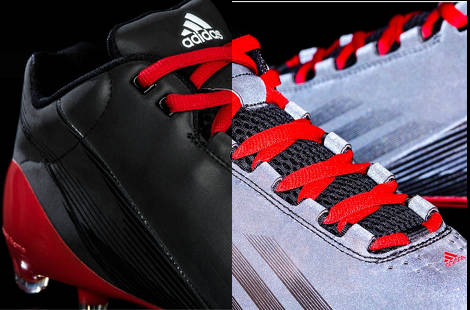 We imagine adidas would love to see it brought onto the football pitch, too, even as a limited release. We’d love to see Leo Messi in a pair of one-off adiZero III’s in action at the Champions League Final, his boots discrete on the pitch but glowing bright white in all the photos the day after!

So, we’d love to see Spotlight brought to football boots (don’t make us beg, adidas…) how about you guys?

Written By
Kyle Elliot
More from Kyle Elliot
It was a Van-Tastic weekend to be a Gooner in the pick...
Read More