It seems the new style adiZero and adiZero Prime have barely had time to settle on store shelves before adidas are already announcing new colourway for their lightest-ever football boots! 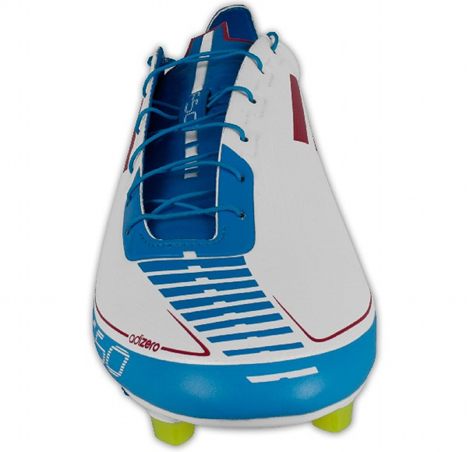 Dedicated Footy-Boots.com fans have seen these football boots coming miles off, as we first clocked them on Chinese national team keeper Shichang Zhang way back in November, and again at a trade show in January – but it sure is good to know we’ll actually be able to get out hands on a pair soon! 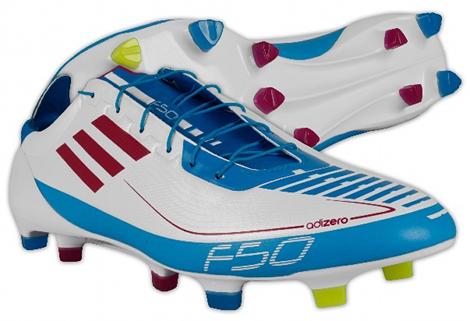 After the eye-bleedingly bright Warning Orange and the slick-looking Black/Electricity of the two adiZero Prime launch colourways, it’s great to have a colourway that sits pretty much bang in the middle.

The crisp White main colour really looks great with a white kit (as Mr Adebayor showed us last weekend!) and the flashy Pink and Cyan is enough to keep players who like their footwear to be a little bit bold satisfied too.

Keeping up with the adiZero Prime‘s tradition of colour-coding it’s studs, adidas have gone for the two ‘pop’ colours of Pink and Cyan and added in a couple of Electricity ones in on the toes too.

Whilst we can see why adidas do this, it’s a shame that they were for the yellow-ish electricity for the toe-end studs, as they don’t contribute to the ‘cool’ feel these football boots give off – but it’s not a deal-breaker!

We can’t wait to see which players adopt these smart cleats, as they’d look great on Messi in the Argentina Kit, or Jermaine Defoe, who plays for both club and country in White and Blue!

adidas are expected to put these up for retail around the end of March, and this new colourway could well signal that we could expect some other new football boots releases in that timeframe, so keep your eyes peeled!

Written By
Kyle Elliot
More from Kyle Elliot
Sock it to me! Ribery, Gotze and Shaqiri test a two-component footwear...
Read More