We hope you’ve got some protective eye-wear at hand, because the new adidas F50 adiZero Prime Anodized Purple/Electricity/Infrared is Bright with a capital ‘B’!! 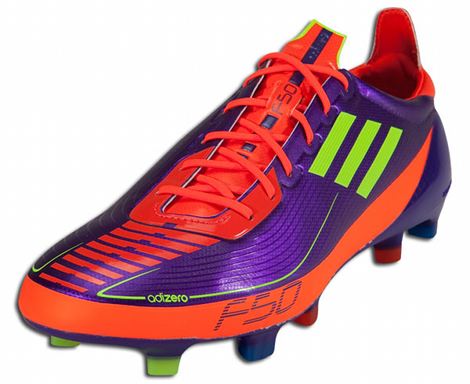 Since it’s launch, the newly-redesigned adidas F50 adiZero & adiZero Prime have been impossible to avoid as the Warning Orange colourway has dominated pitches and stood out on TV cameras for the past 4 months – lighting up the turf on the feet of stars like Lionel Messi, Nani, Gareth Bale, David Villa and David Silva.

Now, it seems that the adiZero Prime and adiZero are set to catch the public eye all over again with this electric new colourway that’s sure to draw attention!

In a 2011 that’s seen ‘Warning Oranges’, ‘Plum Reds’ and ‘Metallic Chromes’, these may well be the brightest football boots to come out this year! adidas have left no colour out of their latest creation, seemingly grabbing the most luminous shades the visible light spectrum has to offer and slapping them on a pair of soccer cleats.

The adidas F50 adiZero Prime Anodized Purple/Electricity/Infrared is the first of adidas’ new wave of branding for the Champions League following the final in London at the end of the month – meaning we can look forward to many more football boots, footballs and training gear to be abroned with bold colour clashes, with the Anodized Purple set to feature on many of the official adidas clobber for the 2011/12 UCL season. 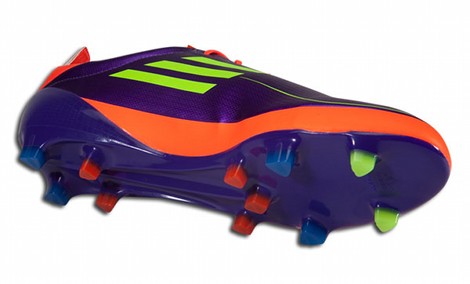 We’re not sure what else to say about the adidas F50 adiZero Prime Anodized Purple/Electricity/Infrared – normally, we love talking about what colours work well together, what a new colourway brings to a pair of football boots that previous ones haven’t and what neat little design touches the creators have put in.

But in the case of these cleats, the eclectic colour choice barely works together, with the purple and orange a clash that we’ve never seen before on a pair of football boots, the Electricity adidas stripes and studs providing a bold branding for these adiZero Primes and the blue studs seemingly chosen at random; we’re not sure what we think of them! 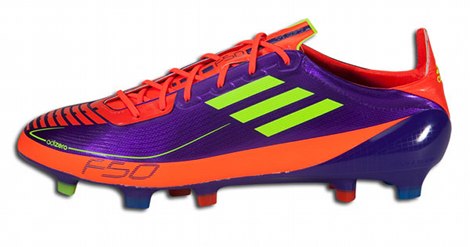 There’s one thing for sure, these football boots are set to split opinion and get people talking without question.

One talking point we’re looking forward to is which players will be brave enough to take to the pitch in them!?

The new adidas F50 adiZero Prime Anodized Purple/Electricity/Infrared is available for Pre-Order this week, with the boot hitting retail officially on June 1st for £210/$299.99

Will you be one of the players making the ultimate statement in these adiZero Primes?

Or will you be sticking to a more reserved pair of football boots?

ADIZERO PRIME – ANODIZED PURPLE/ELECTRICITY, 7.4 out of 10 based on 67 ratings