adidas have teamed up with computer hardware giants Intel to provide a new interactive shopping experience in their retail stores, but accidentally let on more than they probably wanted to by letting some new colourways onto the demonstration stand at an expo last week. 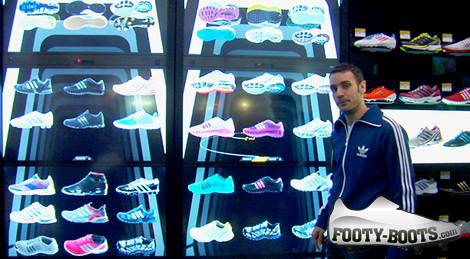 If there’s one place on Earth you think you’d be safe from Footy-Boots.com’s expert team of football boots-spotters, you’d think it would be the 2011 National Retail Federation’s conference in New York (obviously). But apparently not!

Whilst demonstrating the (admittedly cool) virtual footwear wall – A cluster of giant touchscreen monitors that recognise you as male or female and allow you to access colourways, info, adverts and even tweets about the boot you’re about to buy – something else caught our eye! 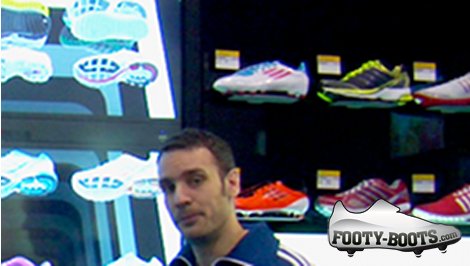 Lurking off in the top right of the screen are a pair of White/Cyan/Radiant Pink adiZero football boots, though we can see by the soleplate they’re not the adiZero Prime.

Long-time readers of Footy-Boots.com will recognise these as the same colourway we spotted Chinese ‘keeper Shichang Zhang in back in November, so we know they’ve been on the horizon for a while – and it looks likely that they will be the next colourway that we see the adiZero & adiZero Prime in.

Whilst there were no other physical new boots on the stand, the virtual footwear wall was displaying a few pairs of football boots we’ve not seen before. 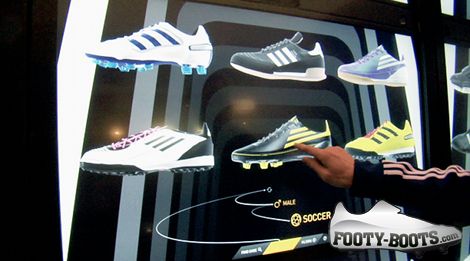 The first we noticed was the new-style F10 turf in the original adiZero’s White/Black/Radiant Pink colourway – which certainly looks pretty smart, but we doubt that adidas would repeat a colourway so soon after the release of the original.

Our next best guess would be that these are a mi adidas creation, but as of this morning, the new adiZero upper is yet to land on adidas’ boot creation service. Curious!

Further down the wall was Blue Predator (again in an astroturf soleplate) and a White/Black/Pink Predator with bold Pink studs. Again, our first instinct was that these football boots were the product of mi adidas – but there’s no option to change the colour of FG Studs, and there’s no blue available for the Predator_X as bold as this particular blue.

What do you think of these potential new colourways?

Are they the real deal or mock-ups made for the trade show? Or could they be women’s colourways?