adidas’ Speed Week campaign – in aid of the ludicrously light adiZero Prime – has been the first real big launch campaign of 2011, and it’s been interesting to see your reaction! 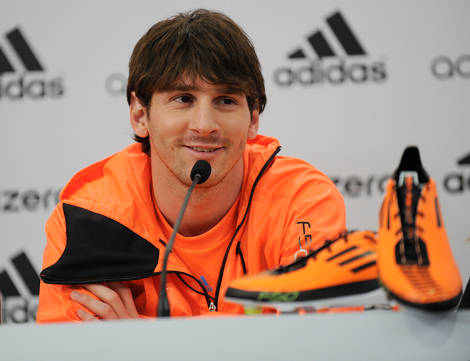 Whilst some of you have been vocal about the concept of adidas stealing their own boots (we’re looking at you Bryan! Don’t think we hadn’t noticed!) it’s been a great way for a small number of fans to get their hands on some pre-release adiZero Primes and meet some of the best players in the world while they’re at it!

Yesterday saw Speed Week hit Barcelona, where 10 lucky winners got the chance to spend an afternoon in the company of Mr. adiZero himself; Lionel Messi!

Messi seemed grateful to have his brand new football boots back in his possession ahead of the Blaugrana’s game on Sunday and thanked fans graciously by spending his afternoon off breaking in the new adiZero Primes!

Whipping on the first pair of the lightweight cleats (interestingly, some F10 Astros!) given to him, Messi was keen to get his hands (or should we say feet?) onto a ball and tried to teach some of the younger fans some of his signature tricks! 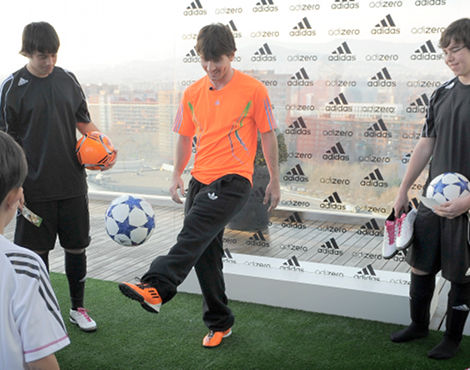 Ever the professional, the Argentine maestro took the time host a quick PES2011 (another of Messi’s endorsements) tourney with the lucky winners, before hosting an audience with the press.

When asked about his new football boots, the Barca magician emphasised the importance of feel on the ball in the adiZero Prime; “My adizeros feel like a second skin on my feet, they are just so light. I play a very technical game so the closer I feel to the ball and the ground the better I feel and the faster I can outwit my opponent.”

Earlier in the week, Jermaine Defoe teamed up with world Heptathlon Champion to launch the adiZero in London ahead of Spurs huge clash with top-of-the-table Manchester United.

Quizzed about the Red Devils, Defoe said “They are a tough team, I don’t think they’ve played as well as they normally do -‘  but they’re not losing games. The players that they’ve got can just turn it on, and it only takes on game to do that.”

Defoe’s not putting it down as a loss though, “They’re coming to White Hart Lane, and they know it’s going to be a difficult game – We create a lot of chances at home. We’re an attacking team, and I’m sure it’ll be a great game to watch and play in.”

As for the adiZero Primes, Spurs Striker Defoe only seemed to have eyes for one thing; the colour!

“Looking forward to wearing the new football boots, obviously they’re light but they’re a nice colour! Orange with a little bit of black; I’m looking to wearing them in on the weekend and hopefully, you know, score!”

Both players will be looking to give the adiZero Prime their debut in big games this weekend – what do you think the outcomes will be? Can Spurs prove their worth as title contenders? Can Messi & Barca continue their amazing season?