After the unexpected debut of the adiZero II on the feet of Lionel Messi earlier this week, adidas are bringing the attention back to the current adiZero with the on-pitch debut of the Anodized Blue/White/Slime this weekend! 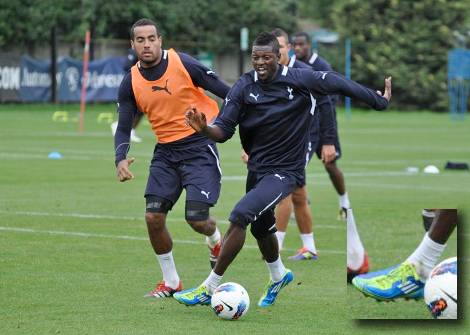 Despite the fact that we gave these football boots their exclusive reveal here on Footy-Boots.com nearly  month ago, adidas have held back from having them on the feet of the professionals for the time being, presumably to give some pitch time to some of the other colourways on show.

Whereas other companies like Nike and Puma seem to have set ‘cut-off’ dates for their colourways, where most of the professionals sponsored will all change to the new range of colourways on a set date, the recent slew of adiZero colourways seems to have caused some overlap in the F50 camp. 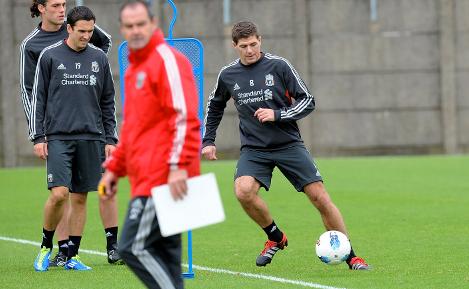 Many players are sticking with the Anodized Purple/Infrared/Electricity & Electricity/Infrared/Anodized Purple worn by the likes of Messi & Villa in the Champions League final back in may, but a small handful of top players like Ashley Young and Jermaine Defoe have been sporting the White/Blue/Slime version, that wasn’t scheduled to receive much on-pitch support.

Now, the new Anodized Blue/White/Slime adiZero‘s are set to hit the pitch, and are already proving popular with the likes of Liverpool’s Stewart Downing and Tottenham Hotspur’s day loan signing, Emmanuel Adebayor. 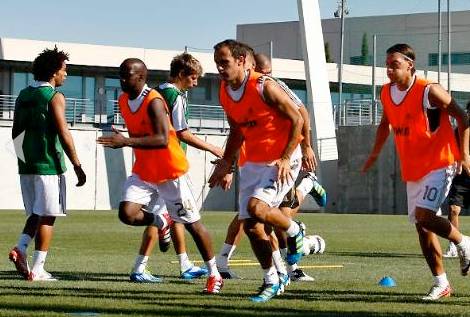 Looking at these new football boots in training certainly gives us an early impression of how visible they’re going to be on the pitch; and it’s fair to say they’re very visible indeed!

The sharp Anodised Blue is going to be very distinguishable, even lurking in the background of this Real Madrid training session, it’s easy to tell it apart from the other football boots on show!

Don’t think we didn’t notice the other football boots adidas news, either! Steven Gerrard could be set for a return to action, and the classic Predator livery of Black/Red/White is exactly what we’d expect from the Anfield skipper now he’s switched up to the adiPower Predator.

However, after blacking out his adiPower and T90 Laser III, it looks like Spurs midfielder Tom Huddlestone could be officially making the switch to the three stripes after training in a non-blacked-out version of adidas’ new Predators.

What do you think to this latest colourway from adidas?

Written By
Kyle Elliot
More from Kyle Elliot
adidas once again give us an excellent helping of football's best, as...
Read More