Emmanuel Adebayor has turned out to be a smart loan signing for Real Madrid, as the Togolese striker seems intent on proving his worth as a world-class centre forward – and it seems the Man City loanee has treated himself to some brand new football boots as a pat on the back! 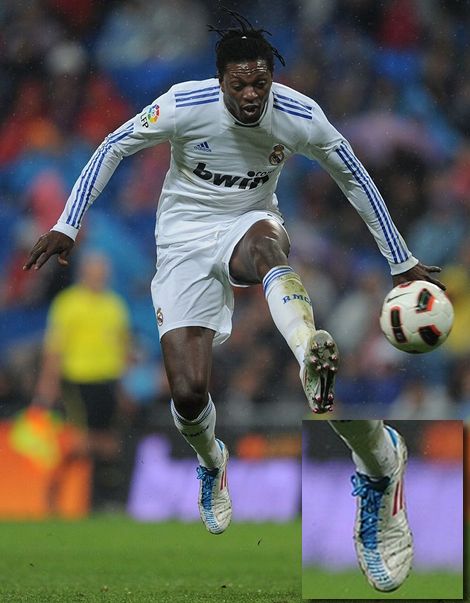 Spotted here in action for Madrid against Levante, the ex-Arsenal striker has opted to wear an unreleased colourway of the adiZero.

We doubt this move was completely approved by adidas, but we’re sure the Three Stripes won’t mind the hype as they gear up to reveal the latest version of their signature speed football boots later on this week.

One point of interest is we can safely say that these are the leather version of the standard adiZero, rather than the new adiZero Prime – and unusual choice for Adebayor as he often trains in the 145g Primes – though this could be a forced switch thanks to the damp conditions at the Bernabeau at the weekend.

First spotted at a Trade show in New York, we’ve been looking forward to the White/Cyan/Pink adiZero for some time, having seen it in both the Prime and regular versions – we’re glad to see it looks great on the pitch and we can’t wait for release day!

Written By
Kyle Elliot
More from Kyle Elliot
Set to be used under the floodlights of the Champions League from...
Read More