Like an expert turn-of-the-century tracker, Footy-Boots.com always keeps our ears to the ground to stay alert to the latest rumours and gossip in the football boots industry.

And we’ve had a few readers get in touch with us about a strange entry that appeared on the adidas Predator Wikipedia page, which we’ve screen-grabbed for you below: 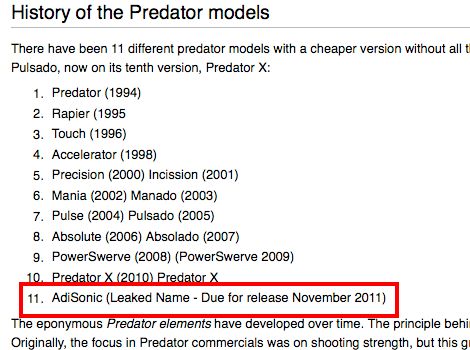 This unusual entry seems to suggest that the 11th incarnation of the adidas Predator series will go by the name of the adidas adiSonic – which sounded to us like it needed some top-level football boots sleuthing!

As it happens, do indeed have a piece of footwear called the adidas adiSonic, but far from being a pair of football boots; they are infact a pair of Baseball Cleats! 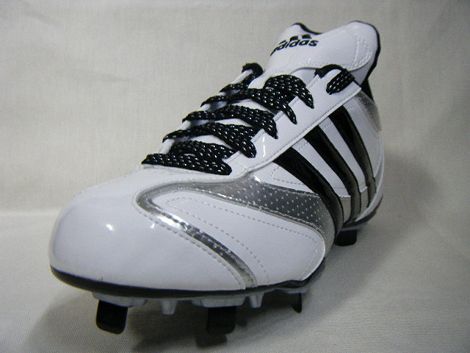 As you can see from the images, the tab-like metal-blades and mid-height ankle definitely set these apart from being a pair of football boots – let alone the adidas Predator_X‘s next in line!

Whilst we’ve seen adidas take names from other products and transfer it to their range of football boots before (the adiZero was a successful running shoe long before it became the adidas F50 adiZero!) we seriously doubt that the adidas adiSonic name will be making it into any of adidas’ silo any time soon.

As for the release date, well it is exactly two years after the launch of the current Predator, so it could be about right – but we think this Wikipedia hoax is the work of someone who’s taken an educated guess and seems to have got it dead wrong!

However, if anything does come of this adidas adiSonic/football boots rumour, you can be sure we’ll have coverage of it here on Footy-Boots.com first!

Written By
Kyle Elliot
More from Kyle Elliot
Umbro brighten up the dark months at the start of the year...
Read More